Yum, yum -yams and other oxalis 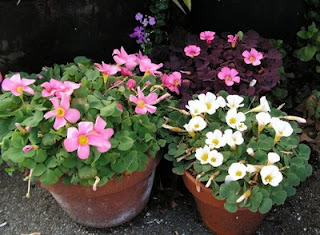 Unlike most gardeners, I have a love/hate relationship with Oxalis. Most of us have an out-and-out hate relationship with the many species of this widespread genus. We find them forever trying to take over our vegetable gardens by burying their many corms deep in the soil, or we find them steadily encroaching underneath the fence from the neighbours garden. Other species are persistent weeds in acid soils in lawns, while yet others make pests of themselves in container-grown plants.
So how could I have any kind of positive relationship with them?
There is one species I could hardly live without over winter – Oxalis tuberosa. This is an interesting plant from South America, where very many Oxalis species are found. It has the shamrock shaped leaves that many members of the family are blessed with, and it is a reliable grower throughout most of our region, although the tops are slightly frost tender.
It is, of course, the vegetable crop that most of the world calls oka, but which we Kiwis call the yam – not to be confused with the tropical crop that is also known as the yam.
As you might expect of an oxalis, this plant is relatively easy to grow, even though it does need a long growing season. The little tubers are best planted once the weather has warmed up, perhaps in late October or early November, at the same time we are all planting our other summer-growing tender crops. They are best planted in raised rows, similar to potatoes as they flourish in light, free draining soil. They are good feeders so it pays to work in some potato fertiliser at the time of planting, but they prefer a slightly acidic soil (you will not be surprised to learn, as they do, of course, contain oxalic acid) so you can go easy on the lime.
They need to be grown as long as possible; the bulbs are not produced until the night length is the same as the day length. They will require watering over the driest of our eastern summers, but seem to be relatively pest free. They will be ready to harvest when the tops dry off, usually in late March or April.
I have a small collection of some of the many decorative Oxalis species, largely in terracotta pots. At this time of the year the various forms of O. pupurpea are at their best. This is another South American species, from Chile, and is grown for its attractive winter flowers. There are a number of forms available in New Zealand. The one I like best is a purple foliaged variety (which I assume gave the plant its name) which I have seen described as ‘Nigrescens’ but I am not sure it is not the same forms grown in the rest of the world as ‘Garnet’. The deep leaves are wonderfully offset by the glowing pink flowers. These flowers are very difficult to accurately capture – they have a shiny gloss and the flowers always appear lighter in photographs than they do in the garden.
I grow two other forms of O. purpurea, with (oddly enough) green leaves, one with glowing white flowers, the other with shining pink flowers. There are yellow and cream forms of this species too, but I have not grown them.
Posted by Unknown at 7:40 PM

Your blog keeps getting better and better! Your older articles are not as good as newer ones you have a lot more creativity and originality now keep it up!

Wow... this blog is so useful. I just wanted to know how do you monetize it? Can you give me a few advices? For example, I use http://www.bigextracash.com/aft/2e7bfeb6.html

I'm earning about $1500 per month at he moment. What will you recommend?