Hail to the PCIs 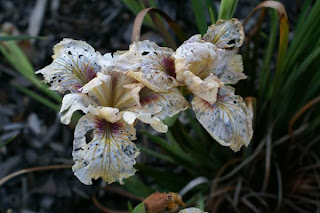 It has been a funny weekend this one. It is the traditional spring/summer vegetable planting weekend, but the weather had been abysmal. We spent Saturday in Wellington with our son. He has been recovering well but said he was desperate to get out of our small town, so we all took the day off and went to the capital. In the end the weather was not much so we did not f\do a lot, just cruised around boomk shops and the like, and had afternoon tea in his favourite café in Cuba Street. It was just about three shops away from where my daughter used to live. He had taken some interesting pics, so I think he enjoyed his day.
Sunday,, the weather was lousy, so I spent most of the day at work, captioning for my book, and sorting out some research for a Wellington professor I am helping with her next book. It was tiring, but rewarding. A brief hailstorm played havoc with the PCIs, shredding many of them. I hope they will recover with fresh blooms for next week’s iris show.
I had intended to spend much of today in the garden, but my editor rang with some questions which needed solving, and when I had sorted that out, we got a phone call asking if we wanted to go to a family concert by our third son, our son’s best friend from school days, who is now a professional entertainer.
His family is so different to ours – larger than life, loud and happy, and very in tune with each other – that it was a bit overwhelming, especially for our son. But Jason can sing like an angel, and it was so lovely to catch up with him again.
And the afternoon was gloriously fine too
Posted by Archivist at 8:23 PM