Among the first seedling PCIs I raised was a problem plant. It was very robust and grew lustily, but it had flowers of a shade of purple I am not fond of, and it carried its flowers in the foliage a little - well, a lot actually. I would have pulled it out years ago except my neighbour Bill, who is no flower gardener at all despite being a great vege man, used to jump the box hedge between our two front yards, and almost fall to his knees in rapture at this iris.
So I allowed it to live.
For the last couple of years I have had problems with snaking stems on early irises, so this year I did not prune the foliage in autumn as I usually do and look how Bill's favourite has responded. 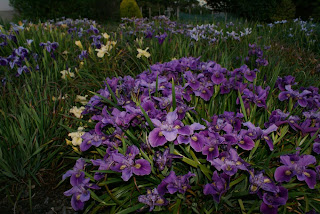 Now I have a number of problems. Do I keep this iris after all? Actually, Bill has shifted and new neighbour Nick does not seem so much of a garden guy so I can take it out if I want to.
Seeing it is so floriferous, should I breed with it?
Can I even find its identifying tag now, as it has grown out beyond where the tag should be, and it will probably have snapped by now as I have not replaced it?
Aaaah, the joys of being a plant breeder.
On other plant breeding news, there are about twenty Lapageria seedlings in the glasshouse, from my white/red cross. Fingers crossed - as always.
Posted by Archivist at 7:56 PM