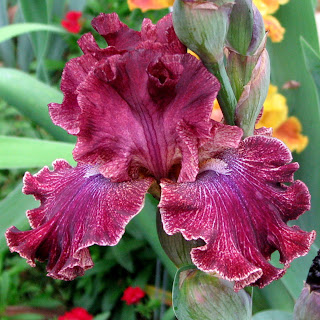 Late spring, early summer is the most exciting time of the year for those of us who are iris lovers. Although there are irises in flower most months of the year, this time of the year is the height of the flowering season, with the majority of the best known forms coming to their peak.
Most gardeners are most aware of the tall bearded types, often called ‘flags’ by older gardeners. They come in the most fabulous range of colours (Iris was the Greek goddess of the rainbow) and have become much more weather resistant over the past few years.
Older tall bearded irises have much more muted colours that would be considered the norm today, but they are also some of the most interesting types around. There is even a special society dedicated to growing these older irises, the Historic Iris Preservation Society, HIPS. New Zealand has a special interest in this group, as Wanganui iris breeder Jean Stevens was internationally regarded in the middle years of the 20th century. Wairarapa iris fanatic Terry Johnston, who runs a web site dedicated to New Zealand and historic irises at http://historiciris.blogspot.com, has made a special study of the Jean Stevens irises, and is recognised as an authority of her work. One of Terry’s favourites among her many introductions, is ‘Summit’, which he describes as a “stunningly bright, stand-out iris,” with its bright golden falls and its near-white standards. It is certainly a great iris.
Modern beaded irises tend to be more ruffled and tend to have more flowers on each stem. The Australian Barry Blyth has bred a wonderful range of hybrids well-known world-wide now, and the Californian breeder, Joe Ghio, also keeps a steady stream of wonderful bearded types.
If you have not seen modern iris, it would pay to get along to a local display garden, or to your local flower show, where a good range should be on display.
Bearded irises tend to come from warm climates, and need soil high in lime if they are to flourish. They do well in Mediterranean gardens, with lavender, cistus, Ceanothus, and similar plants, and combine with members of the Dianthus family perfectly. They tend to have their flowering peak at the same time too.
They are one of the few plants that prefer to be planted on the soil rather than in it. The rhizomes should be placed on the soil surface, with the roots buried. Older books insist they need to be replanted in autumn but they will transplant well when in flower, so if you see one in a garden and you think you can convince the owner to give you a piece, grab it while you can be sure which variety it is. Do not forget to keep the plants reasonably well watered over their first season; after that they are quite drought resistant.
Posted by Archivist at 8:31 PM