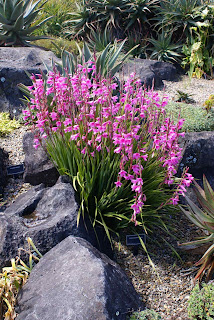 I was reading an interesting piece about gardening in a popular magazine last week. A prominent Auckland gardener was talking about a slight trend she had noticed towards growing flowers again. I was surprised at first, then got to thinking it was an Auckland thing, the trend towards non-flowering plants anyway. Then I thought again. When I walk through the streets of most New Zealand towns I can see the results of a drift towards evergreen shrubberies, grass gardens, and architectural feature gardens.
Each of these gardening styles has it merits, and parts of my own garden reflect some of these ideas, but I cannot imagine a garden without flowers providing too much interest.
I was thinking about this the other day when I drove over the Rimutaka range to Wellington. There is a very pleasant garden lining the roadway at Te Marua, where someone, and I suspect it is not an ‘official’ garden as it is too colourful, has planted up a wonderful bed of perennials and bulbs – and there are flowers everywhere.
It looks quite easy-care, as there are lots of gazanias and other daisies as well as a sprinkling of other easy-to-grow perennials, but the highlight of the bed, for me at least, is the wonderful display of soft salmon Watsonias. They look amazing, and blend so nicely with the other hues in the border.
There are many species of this South African member of the iris family, and all long term gardeners will be very familiar with them. I wonder how many younger gardeners have grown them though as they seem to be almost impossible to buy in garden centres. Maybe it is because they are so easy to grow gardeners just swap them among themselves.
I recall my mother had large clumps of a number of different species, with slightly different forms. Her favourite was a very tall growing species – it grew taller than her – with light pink flowers. I suspect it was W. versfeldii. It makes large clumps of corms, much like small Gladiolus, and can be counted on to be in flower for weeks in late spring/early summer.
Another one she cherished, although she always told me she was not sure whether it was a Watsonia, a Tritonia or a Sparaxis (all closely related), is the reddish, tubular-flowered, W. aletroides. This species flowers earlier in the spring with narrow cylindrical flowers about 75 mm long, and tipped with white. It flowers on stems up to a metre high, and at one time was a very popular cut flower, although it is seldom seen nowadays.
There are a number of large flowered hybrids in gardens, many of them from a programme initiated by a Melbourne nurseryman, and named after Australian cities. I think the salmon variety we see in gardens is the variety known as ‘Melbourne’ but others have continued to play around with these plants and it may be a more recent introduction. Others in the Australian series include the white flowered ‘Hobart’ and the deep rosy mauve ‘Canberra.’
There is a number of interesting dwarf species, including the pretty species named as W. stenosiphon in the Wellington Botanical Gardens. This may be wrongly named, as there is a great deal of confusion about the naming of Watsonia species in New Zealand, at least partly brought about because so many of the species are very variable.
Posted by Unknown at 5:31 PM