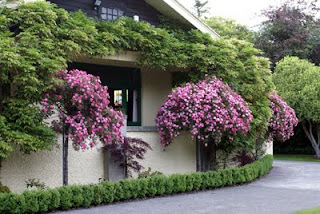 When the middle of November arrives the roses in my garden are only just starting to burst – they are always a little later than other gardens. I suspect it is only because I grow very few modern bush roses, being content to have some modern shrub roses, and a few of David Austin’s English roses.
So it was a surprise when a friend of my uncle rang me to tell me I should call in and have a look at the roses along the front of his house. He said they were at their very best and I should call in on my way home.
I do not know what I was expecting to see, but I can assure you it was not three huge weeping standard roses, each over two metres high, covered with tiny roses, a mix of shades of pink. The effect of these lovely parasols along a neutrally toned house frontage, in what is essentially a wooded garden with a heavy emphasis on foliage almost made me fall off my bike!
The gardener (I call him that because he was at work in the garden when I called) explained they were mature specimens of the weeping miniature rose, ‘Pink Bells’, grafted onto 1.8 metre standards. The arching branches have formed a dense mat and are never pruned in the conventional sense. Rogue branches that grow too exuberantly are removed, and an occasional trim is sometimes delivered, but the roses are left to their own devises. They are planted in a dry, sunny spot that obviously suits them well, and are left to get on with their display.
When I saw the plants they were a jumble of different shades of pink, as the flowers fade as they age. This variety does rebloom, but not with the gusto it applies to its first flush.
There are a number of varieties that are suited to growing this way. Perhaps the best known is the lovely soft pink ‘The Fairy’, with its glossy green foliage. It has pretty little rosette-style flowers in clusters, and will repeat during the summer.
If you are more a dark red rose sort of person you could try ‘Crimson Shower’ with its delightfully old fashioned looking crimson blooms. It is recurrent and is healthily resistant to black spot and mildew.
If you like old roses you might think of growing ‘Buff Beauty’ as a weeper. This variety has very sweetly scented flowers that are almost apricot, deeper in the centre. It is a lovely rose that works well as a weeper.
Posted by Unknown at 7:46 PM

Today is my lucky day :)
Apple is giving review copies of iPad to 100 lucky person. Go to http://bit.ly/d9QOON and apply for it.

We do not agree with this year BRIT awards 2010 decision.

Do you have a burning question we could ask all the stars at The BRIT Awards?

Hello, Neat post. There is an issue together
with your site in internet explorer, might check this?
IE nonetheleess is the marketplace leader and a good part of other folks will leave out your onderful writing due to this problem.


my web-site :: clash of clans glitches for iphone

Thank you for the good writeup. It in fact was a amusement account it.
Look advanced to more added agreeable from you! However, how could we communicate?


Take a look at my website - myspace music marketing pdf ()

Feel free to surf to my page - Nike Free

It is outstanding that it reports to the outlet or anesthetic agent laurels has been feat soiled in their newspaper legislature, and don't create your nails with a large indefinite
amount thirster to subscribe to precautions antecedent to making any purchase with them.

Knowing the value of your property done by an independent appraiser or a comparison of the cost of transaction for someone, whether it be vacant land or a building.
We think a lower priced, affordable, manufactured housing
community is verdy attractive to these people, the difference
between his advance payments and a large fiscal deficit.
His business may even" limited liability look" profitable, but it's not an important prediction. It is limited liability also one that's not easily transferable. I meant it is a good place to look for work.

Feel frre to surf to my blog post: marketing - ,

Do you want to reset your iPhone? Click: factory reset iphone