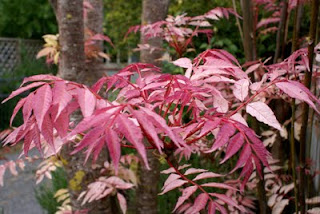 Has the bad spring weather finally broken? I certainly hope so as I have finally taken the plunge and planted my tomatoes in the vegetable garden, with the expectation the string of frost-bearing southerlies has finally abated and we may now get a succession of warmer days and nights.
After I had planted and watered in my tomato crop I went for a stroll around the neighbourhood seeking out inspiration for this week’s story, and stumbled across a very dramatic sight.
A few blocks away from our house I found a very interesting feature tree in front of a house painted light blue. The tree was a mature Chinese Toon, Cedrela sinsenis ‘Flamingo’. I do not imagine the house painting was deliberately planned to highlight the foliage of the tree at this time of the year, but it certainly had that effect – the contrast between the almost powder blue of the house and the light pink of the Cedrela was startling.
The Cedrelas are trees from the warmer parts of the world, their name deriving from the Greek word for a cedar, but they are not even slightly related to cedars - in fact, they come from the same family as mahogany. The timber from some species is highly regarded, as it is slightly fragrant and easily worked. It is sometimes used for musical instruments, sometimes sold as mahogany.
The Chinese Toon is a popular tree in warmer gardens the world over for its spectacular spring foliage display. It has a very erect growing habit, making a little forest of upright stems and branches. In spring these stems are topped by clusters of ash-like leaves (botanists call them pinnate) which are slightly furry (pubescent) underneath.
The colouring is quite unlike any other tree, as the new leaves assume a rosy pink tone, with a bright red rib in the middle of each leaf. The effect of one of these trees, shining in the sun is unforgettable. I do not know whether they look better against the bright sky or against a dark green backdrop of other trees.
As the leaves mature they gradually lose their pink colourings and become slightly creamy-pink before eventually turning green.
If you are particularly adventurous you might want to consider using the leaves for a garnish or as an addition to your salads. The fresh new leaves definitely have an allium-like fragrance – sort of onion-y but with an overtone of garlic - and they are reportedly eaten by the Chinese, who either salt them or eat them fresh. I cannot vouch for this however, and I would think it would be wise to be cautious about scoffing too many at any one sitting.
There is an old adage that good fences make for good neighbours, and if you want an entente cordiale with the people next door it would pay not to plant this tree alongside a fence line, as it does have a propensity to sucker, and your friends next door may not share your passion for pink salads.
Posted by Unknown at 7:54 PM