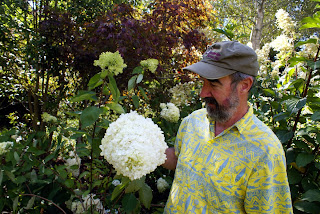 Last week I wrote about a recent visit to the Taranaki garden of author Glyn Church. ‘Woodleigh’ is situated just north of Oakura, near another nationally significant garden, ‘Ngamamaku’. ‘Woodleigh’ is home to Glyn’s extensive hydrangea collection, and during my visit we spent some time looking at some of his favourites among the many species and varieties that make us this large group of plants.


The first plant we saw was a very large specimen of Dichroa versicolor. This shrub from China has become quite well-known in the past few years, and is sold under a variety of names – usually with “blue” at the beginning.

I have always known it to be a relative of the hydrangea, but Glyn was able to shed a little more light on its history. He told me he introduced it to New Zealand, and had it growing in his garden for some years before it was released to the market. From there, different nurseries picked it up, giving it varietal names. It is an evergreen shrub with bright blue flowers from early summer into the autumn. The bright blue flowers are fertile, and carry berries in the autumn.

One year he noticed some seedlings in his garden, which he grew on until they flowered. Once they flowered he formed the opinion that they were actually crosses with a Hydrangea, and kept careful notes of the various hybrids he had. He spoke at a Hydrangea conference in Belgium (yes – there are such things!) about his discovery, and was intrigued to find an American nurseryman who has raised many hybrids between Dichroa and Hydrangea, and never succeeded in breeding anything as colourful as Glyn’s seedlings. It turns out, too, that the plant we have been growing as D. versicolor is in fact a hybrid itself, first found by the plant hunter Robert Fortune in a Chinese nursery.

As we walked around the garden, Glyn showed me the plant he considers the best of his hybrids – one called ‘Cambridge Blue’, and it is a lovely big flowered hybrid.

Work will continue in these crosses, as they offer the chance of evergreen hydrangeas that are able to grow in full sun, as the Dichroa does.
Posted by Unknown at 5:07 PM

Wow ... that is a huge bloom. It's a beautiful flower.

It is not too bad, is it Bernie?

To me it is not clear