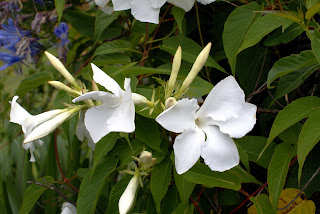 My best laid plans for tricking the little girls that frequently visit our garden have gone astray. You might remember that I reported in the spring that I had sowed some purple carrot seed to try and catch the girls out when they went bandicooting in my vegetable patch.

They were in the garden today, relaxing after having a swim. I nonchalantly mentioned that they could have some carrots if they liked, and the younger one enquired if they were purple or orange!
They are obviously far too smart for me, but I did manage to extract a kind of revenge. They had ridden their bikes around to our house so I offered to accompany them home – and took them on a large detour to photograph some climbing plants. It involved ascending a long but not excessively steep hill, but it was too much for the younger girl, who resorted to pushing her bike part of the way. She turned the tables on me as we neared home, streaking past and screaming with delight as she beat me to the front gate.
So what were we looking for on our ride?
My first mission was to photograph the hardy “Chilean Jasmine”, Mandevilla sauveolens. This is one of the very few hardy climbers with large white flowers, and can be relied on to flower for months over the hotter part of the year. It is deciduous (that is how it copes with cold weather) but clothes up early in the spring and looks great for the warm months.
It is not actually a jasmine – in fact, it is a member of the Oleander family, and like many members of that group, it has a degree of toxicity. Garden books vary enormously on this issue, most saying it is only so to a minor degree, and a lot of leaves would need to be eaten before it caused any problem. It does have sticky white latex which can be a skin irritant for some people, but do not let these things put you off having this plant. It grew for many years along a trellis in my grandparent’s courtyard, and I never heard of it having any ill effects on anyone.
When we got home , the girls proudly took me around their garden, showing me the strawberry patches (two!) asking whether berries just turning pink were ready to eat. We looked at passion fruit, broccoli, pumpkins, tomatoes, sweet corn and capsicums.
Then the younger girl took me down to the darkest corner of the section to show me a bright white flower growing on a tree. Only it was not on the tree. It was on a climber that was twining through the tree. It was, of course, a Chilean jasmine.
By the time I biked home I felt quite depressed -completely outsmarted (and outbiked) by a nine and an eleven year old - and secretly pleased they were so interested in the garden!.
Posted by Unknown at 8:49 PM

Yes if the truth be known, in some moments I can reveal that I agree with you, but you may be considering other options.
to the article there is still a suspect as you did in the downgrade efflux of this request www.google.com/ie?as_q=apollo dvd copy 4.8.12 ?
I noticed the utter you have in the offing not used. Or you functioning the pitch-dark methods of helping of the resource. I take a week and do necheg