The world certainly throws some cruel twists our way. Regular readers will know that my daughter Lavinia died earlier this year, aged 33. She had a long struggle with the effects of reactive arthritis but seemed on the pathway to a better life with a new drug.
Unfortunately the new drug seems to have helped mask a bacterial infection in the jaw which lead ultimately to a cerebral abscess and her death.
When this happened in May we were distraught, and it has been a long hard year for us all, her mother, her partner, her family and friends. This past week has been especially sad as the six-month anniversary of her death coincided with what would have been her thirty-fourth birthday.
Little kindnesses have sustained us - the friend who thinks to bring some fruit or flowers; the friend who realises that the company of children is a blessing and brings youngsters to see us. One special friend brought a prized gem from her garden. She is a galanthophile (lover of snow drops) and she brought one of her prized possessions, a special Greatorex hybrid named "Lavinia," accompanied by a delightful card and soft, comforting words.
She is an internationally known garden writer, and connected by marriage, her later husband being the brother of one of my uncles. She has not had the easiest road through life either, with debilitating illness and the early death of a beloved husband, but somehow manages to always hold fast to the expectation of a new spring rather than dwelling on the coldness of winter.
Her concern was especially poignant as her eldest son also suffers from arthritis, and has had a difficult time coping with the pain and dislocation that the disease carries with it.
This week Michael passed away and I am very sad that my friend will have to suffer that devastating pain of losing a child.
I'll gather some sweet peas and some rose buds from my garden and take them around for her and her aged father.
Tonight give your kids an extra hug and be thankful for all the springs you have.
Posted by Archivist at 1:51 PM 3 comments:

A selection of seedlings from Pacific Mist x Eyes Have It have been remarkably uniform – all very dark blue/purple, and very hard to thin out as they are very similar.
The I. munzii hybrids from Lawyer XP 326 have been enchanting plants, with some very imposing late-flowering hybrids. Perhaps the best are the very light blue forms that are still in flower.
Encircle has left some very floriferous plants with subtle flowers, while 2003’s Pretty Boy seedlings have all been in mauve shades, but with Ghio form. The Magic Sea seedlings appeal to many visitors, with their bright clear blue. This year I have crossed some with the I. munzii seedlings 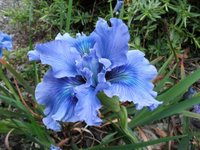 As expected the Pacific Rim seedlings are prettily engaging, with subtle shades and diminutive growth. 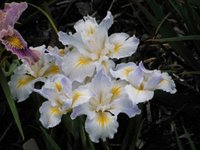 In the main the Cross Purpose seedlings were disappointing but one or two were delightful. 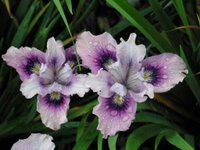 The Big Money seedlings were disappointing, many being washed out mauves and creams. We do still not have a good yellow in the garden, but we continue to hope.

Among the Air Show seedlings, we have two of interest. One is a huge purple veined specimen, while the other is a nice two-toned form. 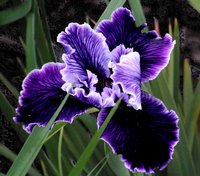 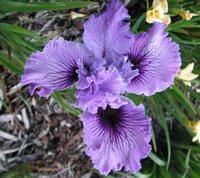 As always we await the first flowering of the following seasons seed, planted out in March – a few tantalizing hints of interesting things for next season – and there is, of course, another 160 seedlings in the glasshouse – about half our own, and half from the seed pool.
Posted by Archivist at 2:33 PM 1 comment: 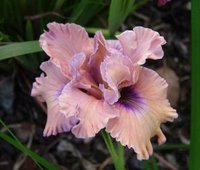 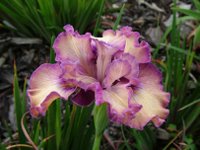 I have also had some interesting seedlings from a cross from Debby Cole’s garden, from the seed pool in 2000. She offered some Air Show x Marine Magic.
Crossing between two clones of this cross has given rise to a number of interesting seedlings this year, again variations on a theme with lighter standards and deeper falls, prettily veined. The best, not shown, is a pure deep purple/red. 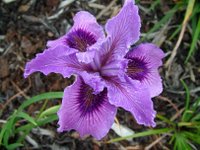 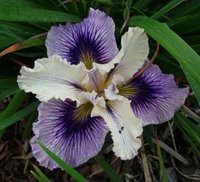 Posted by Archivist at 2:30 PM No comments:

It is nearing the middle of November and the PCNI season is almost over. The last of the I. munzii hybrids have nearly finished and now it is simply a matter of waiting to see the seed pods fatten. The first flowers appeared on about 10 September so a two month span is not too bad.
There have been some interesting seedlings this year. A number of seedlings from Stroke of Midnight showed a great deal of variety. There were a few nice reds (none dramatically deep but attractive nonetheless) and a few lovely very pale flowers with light blue through mauve signals. They look much like Stainless Steel to me. 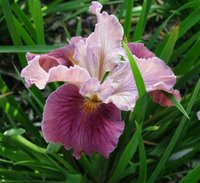 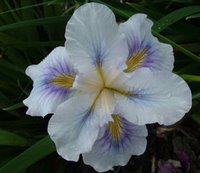 The Pretty Boy seedlings have been very interesting, with quite a variety of form as well as some very interesting colour combinations. They have basically all had yellow through peach to almost burnt caramel ground colours, overlain with varying degrees of colour. It is going to be hard to weed these out, but I have already discarded some of the browner forms as they were very similar. 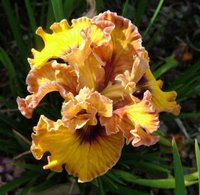 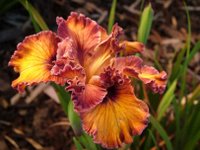 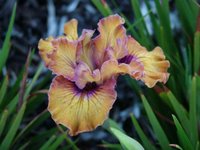 Posted by Archivist at 2:12 PM No comments: