Irises on my mind

The dreadful effects of the Christchurch earthquake are still on my mind – it is hard not to be
affected by the scenes we have seen played out on our television screens each night, and read
about in our newspapers each day. We have seen news of people we know, and heard their singular
stories about how they escaped from the shakes, and how they are trying to adjust their minds to
the new city they live in.

Like most New Zealanders, I have friends and family in Christchurch – an uncle and auntie, and their
three daughters. The older generation has passed on, and the girls live in rural town in Canterbury –
Oxford, Ashburton and Geraldine – and they are all safe.

Not so the street they were brought up on, and where I stayed as a teenager on my first visit to the
South Island. Woodville Street did not fare very well in the quake – there was terrible liquefaction in
some of the sections, and I caught a glimpse of it in a news item about neighbours pulling together
to help each other.

My uncle and auntie were great gardeners, and both long term members of the New Zealand Iris
Society, Uncle Ron serving a term as its president. He was induced to join when he started courting
my auntie – my grandparents, who were great iris fans, gave the newlyweds a dollop of iris plants for
their wedding present!

I lived across the road from my grandparents for a number of years and their enthusiasm for irises
was passed on to me, and I have in turn managed to pass it on to at least one of my sons, who loves
some of the oddly coloured Dutch irises.

These bulbous irises are interesting plants, being complicated hybrids that were bred in the
Netherland although the species involved actually come from North Africa and southern Europe,
the Spanish Iris, I. xiphium being the foundation species. It has lovely blue and yellow flowers, but
crossed with other species, has given rise to a wide range of attractive and hardy bulbs.

There are blue, purple, white and yellow varieties around, but the ones that are most likely to draw
attention, and the ones that my son loves, are the unusually shaded varieties, with a mix of brown,
mauve, purple and tan. ‘Tigers Eye’ has brown lower petals with striking veins and dark blue upright
ones, while ‘Mystic Beauty’ is mauve and bronze.

These need to be planted in light soils, preferably in full sun. They do not have any special needs but
they do need to be kept watered during the growing season, as they are prone to attacks from thrips
later in the spring if they are kept too dry.

Dutch Irises start flowering in late winter, with the delightful old variety ‘Wedgwood’ betraying its
ancestry from the notoriously shy flowering species I. tingitana. Other varieties will flower through
until mid November. 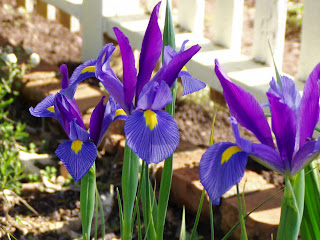 Hard as it is to remember at this time, life does go on – Christchurch will recover, much as Napier did
in 1931, and Wairarapa did in 1942. My uncle and auntie understood that - each autumn they would
scratch their dry soil aside and planted a new set of bulbs, for a new flush of flowers in the upcoming
spring.
Posted by Unknown at 9:00 PM 1 comment: