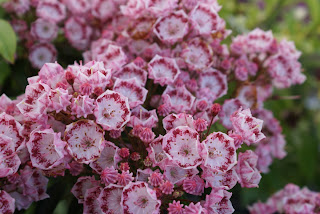 I was wandering around my local garden centre the other day and saw the most amazing display of that exquisite American shrub, Kalmia latifolia, with a wide range of varieties on display in full flower.  This is one of those shrubs that has never attained the degree of popularity it deserves, and if you are looking for a small to medium sized evergreen shrub which flowers in early summer you could not do better than this wonderful species.
Commonly called Mountain Laurel in its native country, it is a member of the vast Ericaceous tribe.  It is found from Maine down to northern Florida and extends westwards as far as Indiana and Louisiana.
Unsurprisingly for a member of the same family as heaths and rhododendrons, it is usually found on soils with a very low pH – about 4.5 to 5.5. is the norm – and like rhododendrons, is toxic to most stock. Some related species are known as “sheep kill” so it gives you a good idea of the danger of planting this beauty along a fence line on a farm!  You might also want to avoid major plantings if you are a hay fever sufferer, as the pollen is said to be a bad irritant, although it flowers as the same time as so many grasses that I do not think you would notice it unless you popped your nose into the flowers.
In the wild Kalmias have rounded clusters of beautiful light pink to white flowers, each dotted with a little “stitch” where the stamen have been pushing against the inside of the petals – it is sometimes called the Calico Bush.  Even the buds are very attractive, crimped and pointed like little buttons of icing on top of a sweet cake.
To be grown very well the Kalmia needs to be placed in well-drained but moisture retentive soil, preferably with low pH.  It can cope with light shade but it is equally happy at home in full sun.  As it flowers late in the season the flowers are not usually prone to frost damage and it can be relied on for a glorious flowering season.
About ten years ago I was determined to grow one here although our soil conditions are not really ideal.  I found a fairly sheltered spot and dug bag after bag of compost into the soil before purchasing a well-grown specimen from a Rotorua nursery. It has flourished and each year at this time I marvel at how well it has done, and how much it flourishes.
But when I see the great range of colours available now, I feel cheated, and I have to say I am scanning around the garden to see where I could make some room for a new shrub or two of these beauties.
Among the varieties that took my eye the other day, ‘Carousel’ was probably the pick.  This is an American bred cultivar, from the extensive planned crosses by the doyen of Kalmia breeders Richard Jaynes. It has light pink buds, and flowers that are light pink but dominated by the bands of cinnamon red.  The effect is off a brightly banded bouquet of flowers. It is relatively slow growing and should not be more than 1.5 metres high and across by the end of ten years.
I was also taken with the brightly flowered ‘Minuet’, a smaller growing variety with large flowers.   The light pink buds open to dark pink flowers with a light pink centre and bands of bright cinnamon red.  This variety, which is smaller growing as the name indicates, also bears unique, dark green narrow leaves.  This is another of Richard Jaynes’ varieties.
‘Yankee Doddle’ is another stunning type. The buds of this cultivar are bright red-pink and they open to show a pink corolla with a narrow maroon band, giving the effect of a strawberry parfait.  Despite its very American sounding name, this cultivar was actually bred in Germany, where Kalmias are very popular garden plants.
Posted by Unknown at 8:56 PM 2 comments: 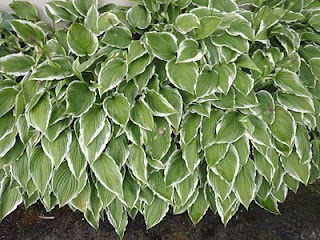 Let’s face it – we live on the eastern side of the country’s main mountain ranges and the weather comes from the west.  That means we live in a rain shadow and that little fact should act as a guide as to what we plant in our gardens – but of course, it doesn’t!
If we live in a dry zone where we should be planting Mediterranean and Australian shrubs, we naturally want to construct gardens out of rhododendrons and hostas, while those gardeners who inhabit wetter regions like Taranaki yearn to grow bearded irises, lavenders and sun-loving plants.  It is just human nature to be contrarian I guess.
I do not grow huge numbers of hostas but I do have a row of healthy specimens filling up a long thin south-facing bed along the front of house.  The bed was so narrow I could not think of anything else that would cope with the peculiar conditions that a cool but dry situation offered.  They have flourished and steadily increased to such as extent that I can divide the plants up every few years and take small colonies to plant in other parts of the garden.
The best of these plants is a delightful blue foliaged form I grew from seed about twenty years ago.  A friend had an extensive country garden and wanted to bulk up some areas in shade with mass plantings of hostas.  The garden was on a large sheep station tot he eats of Masterton, and the gardener’s wife was a very tolerant man – he had to be as the home paddocks kept disappearing into the garden! – but his acceptance of the expanding garden did not stretch to buying hundreds of hostas as about $10 each.
As we were discussing the problem she said she had lots of need on her plants, so I asked her to bring some in and we sowed them into big seed boxes, and eventually pricked out many hundreds of plants, none of the named varieties of course, but many of them perfectly fine for the garden, and some quite pretty forms.
I gave my friend hundreds of plants, but still had plenty to grow of for myself, best of which were the blue ones, which resembled the popular H. sieboldiana ‘Glauca’ perhaps the best known of the older blue forms. Blue varieties are very much in fashion at the moment being the best selling forms, sometimes with a golden variegation.   If you like large leaved forms then ‘Big Daddy’ is probably as good as any, but if you would prefer a smaller form for the edge of the border, ‘Hadspen Blue’ is  lovely little plant with the most gorgeous blue-green foliage with summer spikes of pale lavender flowers above the foliage.
I am not absolutely sure but I think one of my other forms is the old favourite ‘Thomas Hogg’, also known as Hosta undulata ‘Albo marginata’.  This variety with green leaves edged with a bright white margin and was supposedly introduced to western horticulture by the New York nurseryman Thomas Hogg in 1875.  Hogg, who was a great fan of hostas, or Funkias as they were then known, had spent a lot of time in Japan, seeking out new varieties for his nursery.  This old variety does not have the strong foliage of more modern hybrids, and as such is a little prone to slug attacks, but it is reliably hardy and will even cope with more or less full sun as long as the soil is not too thin and does not dry out too much.
Posted by Unknown at 7:58 PM No comments: 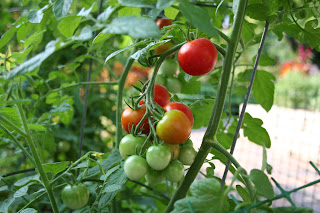 The spring appears to have almost missed our inland valley and we have rushed headlong from winter into summer.  We seem to have traversed from cool, sunless days into gloriously shining days bereft of rain.  The lawns, always a good indicator of how the season is going, have been sluggish this year, not having their usual mid-spring burst, and they are now looking suspiciously as though they are starting to dry off.
What it all means is anyone’s guess – are we in for a sustained drought this year, or are the anticyclones going to head south, leaving us with a muggy, La Nina summer, with plenty of rain?  I guess only time will tell.
Plenty of first time vegetable gardeners will be looking with interest at their new plots, wondering what else they can plant, and asking themselves what they should be doing.  Well, watering is a good place to start.  It is not going to be long before most towns and cities start their annual water restrictions, so it is a good time to get things prepared by ensuring all plots are well watered, and all soil is well covered.  If you have bare soil (as I have in the old vegetable garden) make sure you get something into it, or onto it.  If you are planting, get it done before the real dry weather arrives and then apply a generous mulch of some kind.  In the vegetable garden a compost or straw mulch is very beneficial, helping keep the weeds down as well as keeping soil moisture contained, and it works just as well in the flower garden.
If you have planted small fruits or tomatoes for the first time, don’t forget to cover them from the depredations of birds.  I do not mind the occasional fruit being sacrificed to help keep the local avifauna alive, but I do object to the feathered fiends figuring they are entitled to strip all my crops.  They have already found the new strawberry bed and took the first few fruits before I realised what they were up to.  Of course, I had to shift the old strawberry bed away from the swimming pool at the same time as I relocated the vegetable garden, and the old cover does not fit the new bed, so I had a rushed job after work one night, hastily putting a new cover with plastic bird netting over it.
The raspberry canes will have to be covered too as they have set a nice crop.  I cover them each year and manage to keep the birds at bay – now I just have to figure how to stop the light-fingered little girls from taking the bulk of the crop.
Tomatoes are more of a problem, one I have really only had for the past few years.  I think it started with a bumper crop of Sweet 100 a few years ago, but once the birds had learnt to take the little brightening fruit they just swapped over to pecking away at all the crop.  I have had to resort to covering all the plants once the fruit start to lighten, but I resent it!  I use the white netting that you see on grapevines later in the season, and peg them to the stakes.  It works alright.
Others gardeners have an even worse problem, and find that their leaf crops are being attacked.  We have had this problem in the past, especially with young plants grown from seed, and I found the best answer was to make little cloches out of chicken wire, easily movable, and I just covered the young plants with them until they were established.    You could also try the time honoured technique of stringing defunct CDs on pieces of wire.  The reflections from the discs as they spin in the breeze is said to freak the birds out and they desist.
Posted by Unknown at 4:58 PM 6 comments: