Where have all the flowers gone? 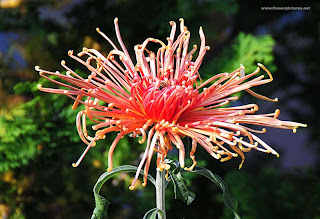 Over the weekend the Head Gardener and I had some time in that most dreaded of environments for a middle-aged man – a big city shopping mall filled with bright lights, trawling teenage girls and shops filled with garish colour. Seeking some respite, I went into a bookstore and had a look at the gardening books.  I was astonished to see that about 80% of them were about edible gardening – fruits, vegetables and herbs.  There were a few books devoted to design – mainly of the “Making your edible garden look good" kind – but there were precious few about growing flowers, and apart from one on roses, the only books on  specific plants were one each about Cycads and bromeliads!
I am as keen as anyone on the resurgence of interest in cultivating edible plants, but I am greatly saddened by the demise of flower gardening.  When I was growing up it seemed to me that most people had a favourite flower they cultivated assiduously  – various family members were fans of irises, roses, camellias, fuchsias and orchids, while organisations devoted to gerberas, carnations, dahlias and cacti all flourished.
Famous New Zealanders were passionate flower growers. Prime Minister Robert Muldoon was famed for his lilies, but few know that NZRFU president Ces Blazey, best known now as the name who guided the 1981 Springbok tour of New Zealand, used to devote his spare hours in summer to growing exhibition quality Gladioli.
This was brought home even stronger to me when I left the bookstore, drawn to a florist’s shop by the heady scent of some greenhouse lilies, and came across vases filled with spider chrysanthemums, in unnatural chartreuse shades.
At one time Chrysanthemums were ubiquitous garden flowers, treasured for their late flowering season, and appreciated especially for the autumnal shades they are often found in.  Apart from the potted plant version, popular with florists and supermarkets, they are seldom met with now, but can there be any plant with so much flower power at this time of the year?
I suspect that the few chrysanthemum plants that are grown in the home garden today are actually potted plants that have been planted outside when they finish flowering.  As long as a bit of care is taken with have a long life in the garden, but expect some changes!  In the nursery your potted mums will have been given a dose of growth retardant, and once they are out in the garden they will grow a lot more exuberantly – they will probably be about 1.5 metres high when they flower rather than the 60cm they managed in their pot.
They will also tend to be a bit straggly growing – nothing terrible but a bit floppy, so it pays to grow them near a fence of some other support. You can pinch them out as they start to grow, and then once again as they have grown a little, which will result in more branching and more heads of flowers, although the individual flowers will be smaller.
Posted by Unknown at 9:51 PM No comments: 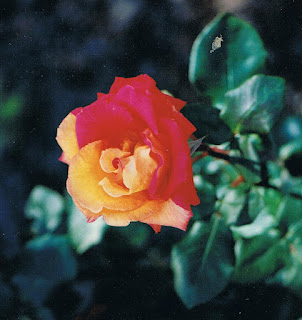 I was cleaning up my office the other day, as a consequence of our recent refurbishment of much of the house, and I came across a photograph I put aside a while ago to form the basis of a column about the way new plants are produced and introduced to horticulture.
It is one I took in the Queen Elizabeth Park rose beds some years ago, when I stumbled across a chimera flower – one where the signals to determine flower colour had somehow got their wires partly crossed, the result being a strange bloom that could not quite make up its mind whether it wanted to be red or yellow.  The decision was obviously so difficult the flower simply gave up on trying to resolve it – one half of the flower stayed the same red as all the other flowers on the bush (and indeed in the bed) while one half decided to go yellow.
This sort of flower genetic shift or change, albeit normally associated with the whole flower or habit  changing colour, is more common that you might imagine at first, and has led to some interesting new varieties, especially among those that are grown by the millions, such as roses.
Sometimes the shrub-sized plant ends up a climbing shoot, which remains stable and can be reproduced.  Perhaps the best examples of that are the climbing forms of ‘Iceberg’ and ‘Peace’.  Sometimes the sport can be a change of colour – ‘Peace’ rose, that doyen of big flowered hybrid tea roses, has given rise to a number of sports, including the wonderful ‘Kronenburg’.  There is a bed of this at the new Queen Elizabeth Park rose garden, and it has its gigantic flowers that are an interesting take on the pale cream and pink shades of ‘Peace’.  It has two main colours - the petals are claret red with straw yellow reverse. It is impossible to ignore and ostentatiously beautiful.  And, although I have never seen it, it has also re-sported, by sending up a climbing shoot, which is available on overseas websites.  And I know of at least one re-sporting of this in Masterton.  A lady came to see me once about a gardening matter, and mentioned in passing how disappointed she was with her ‘Kronenburg’, saying she had cut a whole branch off because the flowers had all turned deep gold!
Perhaps the most common of all ‘sports’ are those that give rise to different coloured foliage, with variegations of various sorts, and sometimes even changes in shades of the entire leaf.  Some plants seem particularly prone to his habit.  Anyone who has owned a large Cupressus macracarpa will probably have seen tips of old branches with golden foliage.  The vast majority of the many golden forms of conifer you see will have originated this way.  The surprising thing is that some plants seem very prone to doing this, while other, such as the ubiquitous Pinus radiata seem very reluctant to do so. Apart from one or two golden forms, which I think were actually seed sports and thus slightly different, there are not too many ornamental forms of the Monterey Pine around.
Posted by Unknown at 9:57 PM No comments: 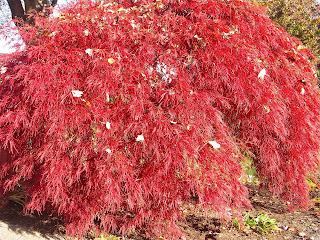 May is a funny month in the garden.  Summer is well and truly past, and autumn is approaching its peak in some ways, but in other ways the winter has already arrived.


Parts of the garden look a mess - the perennial beds look very ragged, with ugly foliage on peonies and hostas requiring looking after, and less than happy-looking daylilies also need a clean-up.
The vegetable garden loos decrepit as well - tomatoes have long since stopped growing, and basil and eggplants need removing.  The last of the unripened tomatoes have to be gathered for placement on a sunny shelf, and the empty space where the summer vegetables once grew needs turning over and mulching.
And then there are the autumn leaves.
There seem to be polar opposite views on the question of autumn leaves.  Some people seem to find them an abomination, and need to clear them daily - if not more often - while others take a much more relaxed attitude to them, perhaps even harvesting them for children to play in, or regarding them simply as a good source of roughage for the compost.
I firmly belong to the latter school, although I must say I nearly changed my mind when the large and resilient leaves from the large flowered Magnolia hybrid fell among the grass-like leaves of my Pacific Coast Iris seedlings.
We do not have a lot of autumn coloured trees and shrubs in the garden - the Head Gardener does not entirely approve of deciduousness - but there are one or two I would not be without.
We have a mature Japanese weeping maple at the edge of one of our shrubberies, and I wonder if there is a small tree which gives as many different highlights during the year.  In the winter it has a slightly gaunt aspect, devoid of leaves as it is, but it also has wonderful architectural shape, the gently tumbling branch habit catching the eye.  In spring our form, which is the plain green Acer palmatum ‘Dissectum Viridis’, pops out the most amazingly bright green leaves, accompanied by very delicate little flowers, like very miniature ballerinas.  They need to be seen up close the be noticed, but they are stunning.  Later the leaves mature to a more sombre green, which the hold nicely over summer, but as winter approaches again, they kick in with a lovely display of yellow, orange and red. Even when that is all over, and you think there is nothing more to come, there is a little encore performance from the ‘helicopter’ seeds, which are light brown against the dark brown of the old leaves.
These little beauties, which are reasonably expensive, add so much to the garden that they should be on almost everyone’s list of top shrubs.  There is quite a range of them available nowadays - more than when we bought our one, when there was basically one green and one red form around, with a number of different red (or purple) varieties to choose from.  ‘Crimson Princess’  has red stems and foliage right through spring and summer, but as autumn approaches it turns bronze then bright scarlet. ‘Crimson Queen’ is slightly more subdued, but has similar habits, while the old variety ‘Inabe Shidare’ has lacy purple foliage that is tougher than most, enabling it to cope with more sun than most other varieties.
If you want a totally different form try the new ‘Orangeola’.  This has orange tinted leaves when it first opens, but the leaves then turn deep rusty brown before becoming green for the main growing season.  But the show does not end there, as a supply of new orange leaves is produced over the summer, the new foliage looking like flowers. In the autumn all the leaves turn dark red before finishing off back again as orange.  A superb weeping variety that is quickly becoming popular overseas.

Posted by Unknown at 6:05 PM No comments: