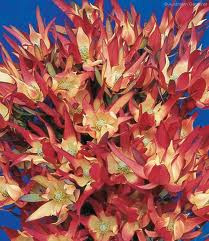 I had a bad case of déjà vu the other day.  I was wondering through my local garden centre having a look through their new arrivals, when I noticed a lovely red Leucadendron, with bright shining bracts.  It looked a little like the old variety we used to sell as L. salignum ‘Red’, so I looked closer to see what variety it was.
I was pleasantly surprised to see it was named ’Jack Harre’, after the well known and regarded protea grower.  It brought back pleasant memories of trips up to the Harre nursery at Rewa, near Kimbolton, where we would load up truckloads of Leucadendrons, Leucospermums and Proteas, and then retire for a cup of tea with Jack.  He was an ex-dairy farmer and his nursery was not the tidiest one you will ever see, but he certainly knew his plants and had a great way with words.  He wrote a very good book on the Protea family, and was even interviewed by National Radio about his childhood.
The Leucadendron named for him is a compact growing form with flaming-red star-like bracts at the end of arm-length branches from early in winter. The cooler the weather becomes, the deeper the flowers become.  This is a rapid growing form suitable for most gardens, and becomes a nicely rounded shrub.
Posted by Unknown at 9:28 PM 7 comments: 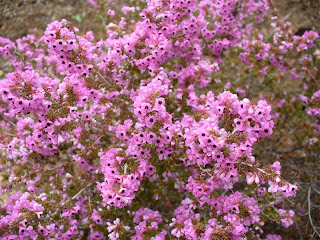 During this past week I have been corresponding with a Christchurch-based researcher who is writing a history of gardening.  He was interested in the changing way we have gardened over the past forty years, the time I have been active as a gardener, nurseryman and garden writer.
It made me think of the huge changes made in the garden world, with the demise and diminution of many of the specialist flower societies that were once so popular – who has a cactus club in their region any more? – and to the many fads that have come and gone during that time.
The writer was especially interested in the cult of the pebble garden in the 1970s, wondering whether it really was as popular as some of the literature of the time would indicate.
I can certainly recall the intense interest in this form of gardening, which seemed to involve me unloading truckload after truckload of bags filled with dirty and heavy scoria, the pebble of choice, even this far away from the source, and the thousands of dwarf conifers and small Ericas that were very much in fashion for these gardens.
I suspect the fad came from a combination of the popularity of the Western American Sunset series of garden publications, which stressed the idea of planting gardens that required little maintenance, combined with the English notion of heather gardens, largely comprised of Ericas, Callunas and dwarf conifers.
In New Zealand we added some native elements – the variegated Hebe ‘Waireka’ seemed to be in every pebble garden, along with the yellow flax, Phormium ‘Yellow Wave’, and the dwarf  dark leaved kohuhu, Pittosporum ‘Tom Thumb’.
The craze did not last very long, but in a way it has a continuing influence, with many modern gardens having stone mulches and, especially in northern areas, a Californian planting style.
In our rush to get away from such plantings we have also abandoned many of the plants that were such a feature of ‘pebble gardens’, and maybe it is time to rethink our attitudes to these once-popular garden features.
I recently stopped and looked at a heather bed in the Wellington Botanical Gardens, and I was underwhelmed.  It contained a number of cultivars from both the Northern Hemisphere, generally with smaller flowers in clusters that flower in winter and spring, and those from the African continent, which have larger flowers, a greater colour range, and also flower for a longer period.  I think most of the plants would work be of more value when planted in a mixed planting, and should not be isolated in a ghetto of Erica-only beds.
For winter flowering it is hard to go past Erica melanthera, especially the form sold as ‘Improved’, which has a vibrant mass of pink haze from early June, and the exciting  Erica ‘Surprise’, a supposedly pure white form of Erica melanthera which sometimes produces both pink and white flowers hence the name.
Posted by Unknown at 7:31 PM 2 comments: 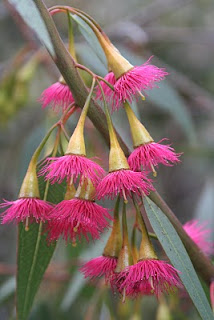 The weekend did not start very well for my whangai granddaughter.  A soccer game in the cold and wet went gone badly awry, the scoreline being so onesided I will not embarrass her by repeating it here, but let me assure you, it was ugly, and made worse by her having friends playing in the opposing side.
To try and rescue the day, we decided we would take her younger sister and investigate the pig pens and chicken coops at the nearby school to revive flagging spirits.  Fortunately the rain had abated and the wind had died down, so we traipsed across the paddocks to see our farm animal friends.
The children were enchanted by the ham and egg production units, but I was far more taken with the wildlife – mud-encrusted pigs’ snouts just do not do it for me, but the sound of the tuis chortling and singing away in the adjacent gum tress was a delight.
The school has a major planting of gums for firewood but the tuis were inhabiting a beautiful specimen of the winter flowering red gum, Eucalyptus leucoxylon ‘Rosea’.   This is a selected form of a widespread Australian species, with deeper coloured red flowers than are normally found in the wild and is an invaluable tree for the gardener wanting to attract extra bird life into the garden in winter, as it flowers for many months during the coldest time of the year.
It is a small to medium sized tree (among a family that has some giant members) with attractive light-coloured bark and typically olive green gum leaves and, although it probably grows too big for small gardens, it is one that should be considered for slightly bigger sections.
I know those who advocate all native gardens for everyone are not going to like the idea of planting Australian gums tui feed, and they are not going to like the idea of using Banskia integrifolia for the same reason. It is perhaps not the most exciting of this Australian genus of trees and shrubs, but the light yellow bottlebrush flowers, usually with a funny greenish cast as well, are very freely produced through most of winter.
There are many different varieties of this species in , including both coastal and mountain forms with different growing requirements. The most commonly planted forms in New Zealand are all seed raised and seem to be able to cope with most anything our climate throws at them, although they do struggle with cold and frosty sites.
It is hardy and quick growing, and is often used for shelter belts in warmer areas of the country.  It copes with both sandy and clay-based soils, so is a good choice to help establish new gardens.
Posted by Unknown at 9:06 PM 2 comments: