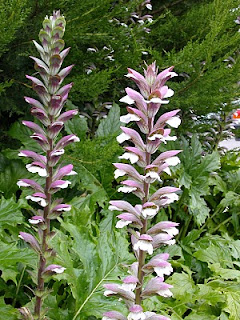 I was looking through some of my gardening books on Saturday, as I recuperated from a period outside in that awful windy and wet weather. As often happens, I did not find what I was looking for, and, as usual, it was my own fault – I got sidetracked by a remarkable coincidence.   Two different books on perennials described themselves as being the definitive one, “from Acanthus to Zauschneria.”
What is interesting is that both these name are probably unfamiliar to anything other than keen gardeners, although one of them is, or rather was, quite a common plant.
The most famous of the many species of Acanthus is the plant known to generations of gardeners as ‘Bears Breeches’, A. mollis.   This is a handsome perennial with shining, green leaves whose distinctive cut shape is replicated in architectural decoration, most famously atop Corinthian columns.  As well as a good show of luxuriant looking foliage, the plant carries a wonderful flower show – spikes of purple bracts that enclose white flowers, up to 1.8 metres high.
This plant is at its best in light shade, with good shelter and a deep moist soil but it can be a bit invasive, spreading by deeply buried rhizomes, and, once established, is tricky to remove entirely.  It is a valuable plant for the edge of woodland or in semi-wild areas, but perhaps not one to introduce into the most valuable spaces in the garden.
There is an interesting golden foliaged form around, originating in the Hollard garden at Kaponga in Taranaki, called ‘Hollards Gold’.  It is very attractive but is just about as persistent.
The only other species sometimes seen in is a prickly customer, as it the name A. spinosus suggests.  In contrast to the above, it has lanceolate leaves, heavily dissected almost to the midrid, and also carries a smattering of soft spines.  Unlike the above, this prefers full sun and a well-drained soil, and is often seen with other spiky sunlovers, such as agaves and aloes.
The other end of the alphabet, the Zauschneria is not as popular as it should be in , as it is a bright and cheerful perennial with a lot going for it.  As its common name of ‘Californian Fuchsia’ suggests, it is a native of western , and it forms a dense bush from a woody rootstock.  The grey/green foliage is topped through the summer and into the autumn with brilliant scarlet flowers, tubular in shape, reminiscent of fuchsias.
This is an easily grown plant in full sun and well-drained soils, where it will easily grow about 40 cm across and about 50 cm high.  There is a white form around, which is pretty enough in its own way, but the red is the thing with this plant, so get that one if you can find it.  It can be increased by division over the winter, but it strikes readily from semi-softwood cuttings in the spring and I think that is the easier way to go.
Another California perennial that is seldom seen is the amazing Californian Tree Poppy, Romney coulteri, which has the most glorious semi-transparent delicately crinkled white flowers,  about 150 mm across.   I guess it is best described as a sub-shrub, as it does form a sort of woody base, growing to about 1.5 metres high and around that wide too, but it best treated as though it is an herbaceous perennial, and cut back each year.
The foliage is grey-green again, very deeply cut,  and the flowers are borne in clusters of up to 20 on the end of long stems which branch at the top.  These flowers, which can be cut for the house although they have an unusual fruity scent, are carried through the spring and into the summer.
This plant is very particular about where it will grow.  It needs good drainage and full sun – it simply will not do well in the shade or damp – but then it presents another problem.  If it likes where it is growing it can grow too well, and be a bit of a pest.  It spreads with runners from its fleshy roots (root cuttings are the best way to increase it) and in well-drained sandy soils it can be a bit of a pest.
T
Posted by Unknown at 11:16 AM 3 comments: 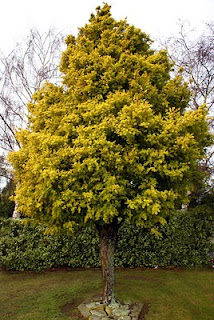 From my office window at home I get a nice view of my neighbour’s golden totara, which is one of those trees that are interesting year round.  In the spring the new foliage makes the whole tree go bright green, but as summer arrives it turns rich yellow before arriving at the deep golden colour it keeps for the winter.  If left untrimmed at makes an attractive irregular growth habit, but of you have a passion for clipping it can also be kept well under control and trimmed to whatever height you want – within reason.   I have seen it used for hedging and the effect is spectacular.
The golden totara, officially Podocarpus totara ‘Aurea’, is a male form and as such will grow slower than most seed grown trees, and will grow in most soils, but like many totaras, does not like to have wet feet.
I think this lovely golden totara may be one of our most underrated trees as it provides some colour, without being a glaring as most of the golden forms of other conifers, such as Macracarpas.
There are not that many golden trees than can comfortably be planted into a modern-sized garden.  When I first started in the gardening trade we used to sell hundreds of golden elms, Ulmus procera ‘Lutescens’ also known as Louis van Houtte, but as this quickly tunrs into a giant,it is too big for small gardens, despite its attractions.   In spring, the new leaves are bright golden- lime but as summer moves on they age to soft golden yellow, deepening to rich yellow in autumn.
It is one of the hardiest golden leafed trees, well able to cope with windy exposed sites. A friend grew some along the top of a rise on his farm, exposed to winds from all quarters, and, although the trees were certainly not as luxuriant as they would have been in a more sheltered spot, they also grew perfectly well for him.
Probably the most popular golden tree for home gardens now is the wonderfully bright Robinia pseudoacacia ‘Robinia’.  This is not really a naturally small tree and needs the occasional pruning to keep it under control, but there is no doubt it is a wonderful tree.  The Robinias are native to the and , R. pseudoacacia being the only species commonly grown.  The type species is a very fast growing tree which has a suckering habit, making it used for erosion control at one time – the stock would not eat it and the timber is very durable, even when untreated.  Having said that, it is hardly a tree for the home garden, as it easily reaches 15 metres in ten years, and does not stop then!
‘Frisia’ was, as the name suggests, discovered in a Dutch nursery, and during the 1980s became one of the most widely planted trees in .  It forms a tidy head of bright golden foliage atop a sturdy trunk, and is manageable with a little care.
Pruning is made slightly more difficult because of two traits of most Robinias – prickly stems and hard but brittle wood.  Because the wood is also so hard, a saw is usually better than pruning shears, other than with small branches, and even then, because the stems are also brittle, they sometimes snap before the saw is halfway through, so be careful.
‘Frisia’ can be pruned almost any time of the year, even during the periods of high growth, but be warned that if you cut it back too heavily it will respond with very rapidly growing new shoots which will need careful pruning within a month or two.
Posted by Unknown at 5:50 PM 2 comments: 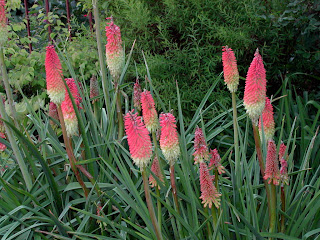 The problem of the winter garden is tackled different ways in different parts of the world. For much of the world that suffers a continental climate, the garden is wrapped up and put away for the winter. There are so few things that can cope with snowdrifts and biting cold that people who live in such climates do not expect to have anything in flower. They pull their garden inside, to ledges in their kitchens, or shelves in their conservatories, and they hibernate until the weather is a little more kind to their gardening aspirations.


In warmer parts of the world the exact opposite happens. Winter is the cooler season when plants can be grown, so gardeners approach the winter season with enthusiasm. In some parts, the summer weather is so hot and dry that plants have evolved reversed deciduous pattern – they go leafless over the summer. In other places, the summer is so wet and disease-ridden that many cool climate crops rot, and have to be sown over the cooler, drier winter period.

Then there are those of us who garden in temperate zones, who like to think we do not have bad winters, and expect our gardens to be at their best all winter long. We plant seedlings that are grown for spring display in other parts of the world – polyanthus and Primula malacoides for example – to give us colour through the winter, and we even look to some perennials to give us colour through the cooler months.

Among those we can rely on are some winter-flowering members of genera we normally think of as spring flowering, and probably the best known of those is the long familiar “Winter Cheer” Red Hot Poker. This is the stoutly performing orange-red flowering plant that is seen in many city gardens (and seemingly every country garden) from the top of the North Island to near the bottom of the South. It can be relied upon to flower from as early as June through to spring.

This is such a tough and free-growing plant that we tend to take the other members of the vast Kniphofia genus for granted, but there are some wonderfully valuable garden plants among them that deserve to be better known.

“Winter Gold” is a case in point. This is probably the best of the golden flowered forms, growing to about 1.2 meters, the same as ‘Winter Cheer’, but this time with golden flowers that start out limey green in the bud.

These two fulfil another function as well. Each flower head is actually a cluster of small tubular flowers which (usually) hang down from the long stems. These small hanging flowers are filled with nectar and over the winter they will be visited by birds, feeding on the nectar.

Overseas these plants are usually called ‘Torch Lilies’ rather than ‘Red Hot Pokers’ and that avoids the clumsy construction that we Kiwis get ourselves into when we want to talk about the other coloured varieties of Kniphofia. For example, it is faintly ridiculous to talk of a yellow ‘Red Hot Poker’, but that is what we are forced to do!

Although New Zealanders are most familiar with the tall growing forms of these South African beauties, it is in fact among the smaller flowered forms that we find the most attractive range of subtle colours. I grow a number of these dwarf varieties and they provide lots of interest in the summer and autumn garden.
Posted by Unknown at 2:21 PM No comments: