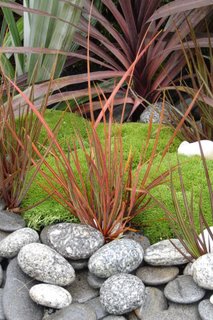 When we think of native plants we tend to think of trees and shrubs – the kauri, the totara, the many hebes and the colourful coprosmas. We might also think of some of the architectural plants like the flaxes, the sedges, and the multitude of grasses. The one group of native plants that we tend to ignore are the herbaceous perennials, so today lets consider some of them.
As you would expect from a self confessed iris lover, I am really keen on the various “New Zealand Irises,” the Libertia ¬species and hybrids. I think they are very under-rated plants, although I suspect that is about to change with the introduction of some new hybrids.
‘Taupo Blaze’ is a variety released from the Taupo Native Plant Nursery, a stunning new form of the endemic plant, Libertia ixioides. The type species is densely tufted plant, with clumps of greenish-yellow foliage. It is very adaptable, growing in full sun through to almost full shade. It is very useful in the full sun, which induces better colour, the leaves going strong yellow or even orange. It has flowers too – pretty little white flowers, tri-petalled but not actually anything much like an iris, held on branching stems. When the flowers have finished the seed heads are also bright orange or yellow.
The species if often used as ground cover or in multiple plantings in hard conditions as it is very hardy. It probably deserves better though, and I have seen some wonderfully imaginative use of this plant in very formal grouping.
Then there is “Taupo Blaze.”
This is a relatively new selection, and already has landscapers excited. It has greenish foliage in the summer but as winter approaches the foliage darkens, going through orange through red, ending up rich burnt red. The white flowers appear in the spring, standing out very well against the dark foliage. The seedpods are deep red.
I first saw this plant in garden centres late last year and was deeply impressed. I can see this having all sorts of uses; from landscape multiple plantings, though to specimen planting in the mixed border, through to highlight planting in containers. I think it would look great in a colourful ceramic pot.
Interestingly enough, this is a plant that performs best in poor soils. In common with many colourful foliage plants, if the plant is growing in nitrogen rich soil much of the colour will be lost. Give this no fertilizer, or at best, give it some extra potash for better colour.
There is a cheery companion for this plant, a very bright form of L. ixioides called ‘Goldfinger.’ This is a bright and cheery little plant, with light green leaves with a bright golden central stripe. This guy is another one for containers I think – perhaps bright blue this time. There is another similar form called ‘Highlander.’
Another species that is sometimes found in garden centres is L. peregrinans. This is a stoloniferous plant – it spreads by little stems that move along the ground, or just under, making new plants. It has much stiffer foliage that the above species, and is not as graceful, but it does have its uses. The quick-spreading nature makes this very useful for bulk plantings, and it is popular for use in median strips and the like. Be a little careful of it in the garden though – it will not stay in one place for long!
Last year, half way up the Tararua Ranges, I came across the charming little L. pulchella. This is a sparse-growing plant, and at about 10 cm long, it is only about a fifth the size of the other species. It would probably not be noticed in the damp places it grows when it is not in flower, but it makes a charming little display when in flower in early summer. If you can find it in a specialist nursery, this is a great little plant for a damp place, or perhaps for a pot in the glasshouse.
Posted by Archivist at 7:48 PM