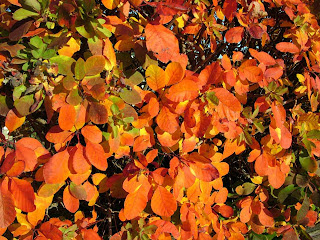 May has started out wonderfully. The succession of warm days and mild evenings has made this a delightful autumn. We have had no frosts to speak of in the Wairarapa valley, and the lack of wind has been a blessing for those of us who love autumn trees and shrubs. Most plants seem to have managed to hold onto their leaves longer than normal – some have not even coloured up yet.
There is, of course, a down side to this settled mild weather. It has meant that the lawns have kicked back into growth, and although they are scarcely at spring pace, they are still growing aplenty. Weeds are also whipping ahead. I turned over some soil about three weeks ago, planting autumn seedlings, and the bare dirt has been invaded. I needed to go over it again this weekend, weeding. The soil was nice and damp though, and the weeds all came out easily enough.
What with weeding and mowing, it was Sunday afternoon before I found any time to go and have a tour around the countryside, looking for autumn foliage. The Head Gardener is an unemployed bum now (for three days between jobs!) so she found the time to come with me and we made our way eastwards.
I was on the lookout for some colour on a group of smoke bushes that are among my favourite autumn shrubs. These particular plants are mature shrubs – perhaps as much as four metres high – and I have watched them since I was a child.
They are the American version of smoke bushes, Cotinus obovatus, so-called because the leaves are egg shaped. The European version, C. coggygria, probably better deserves the common name because this species has plumes of misty purplish flowers in early summer. These would be enough to earn the epithet of ‘smoke bush’, but they fade over the summer and become even smokier and more deserving of the name. They colour up in the autumn but the display is nowhere near as good as that of their American cousins.
C. obovatus is taller growing that its EU relative, and does not have the same amount of flowers, nor the same degree of smokiness. Maybe it is the politically correct smoke bush – the smokefree one. However, what is lacks in flower power it more than makes up for with foliage display. The leaves take on hues of orange, scarlet and purple as the winter approaches, giving a startling display.
The shrubs we looked at used to bring us a lot of trade, as each autumn we had people calling in at the nursery, asking what the shrubs were and where they could buy some. As we knew they would be in display each early May, we made sure we had plenty of stock.
Overseas it is possible to buy named clones of these beauties, with different coloured forms being favoured, but I do not think they have arrived in New Zealand yet.
There is a variety of the European form that is worth growing for a different foliage display, a deeply coloured form called ‘Royal Purple.’ This has deep wine purple coloured leaves with a shiny surface. It has gigantic flower heads of light mauve over summer, and then colours up almost as well as the American forms in autumn.
All the forms share a similar set of requirements. They like a sunny situation and prefer cool, free-draining soil. They do not like the soil to be over-rich, and they certainly do not need fertiliser applied. If grown in rich soil they grow rather coarsely and do not colour up so well. They do respond very well to trimming and shaping. The neater bushes will give better a better display of autumn foliage. They flourish in colder areas with dry summers.
After we had sated ourselves on the smoke bushes, we took off again, heading out into the country. We saw some wonderful poplars, and tasted some spicy wild apples growing on the side of a gravel road. We even saw a friend on a piebald horse accompanied by his young daughter on a rotund little pony, droving a ragged mob of sheep along the road near their farmlet. What we did not see was a great deal of autumn colour apart from an impressive avenue of scarlet oaks glistening in the late afternoon sun.
Early on Saturday morning I had taken my camera down to the municipal park to take some photographs of the autumn display. I headed straight to my favourite tree, a mature Ginkgo biloba. It was at its very best – covered with the bright gold leaves that this tree is so renowned for.
If you have room for one of these magnificent trees, at the risk of being sexist, make sure you find a male. They have better form and they do not have the messy fruits that the female trees bear at this time of the year.
The male trees like ‘Autumn Gold’, ‘Fairmount’, and ‘Saratoga’ all start out with relatively slender habits but become “rounded with maturity.” Sounds like every male I ever knew!
Many prize the female fruits for the plum-sized nut contained within the flesh, but, boy of boy, that flesh stinks! It has the most regnant dirty-socks smell, and it is very difficult to remove.
Just alongside the Ginkgo was an unidentified red-leaved Japanese maple, Acer palmatum. It is growing in a sheltered area away from the worst of the winds and like most of the red forms of this popular maple, it colours up spectacularly. When its leaves fall they mingle with the butter gold Ginkgo leaves the effect is worth an extra trip, so next weekend I’ll take the Head Gardener with me and we will go have a look.
Posted by Archivist at 6:02 PM