One of the great things about my job is that I get to spend half of most days helping people with their research enquiries. It can be all sorts of things, ranging (this week) from the location of petroleum storage tanks in the 1960s, the location of Bacon and Wrigley’s flourmill in the 1880s, through to the discovery of the takahe in the 1940s, and its subsequent cultivation in captivity in Wairarapa in the 1950s and 1960s.
The rescue and raising were largely done by local man Elwyn Welch, whose entry in the New Zealand Dictionary of Biography I wrote some years ago. I was honoured to be invited to the launch of a children’s book about the rescue, and to catch up with Elwyn’s widow Shirley, and their son Murray whom I had gone to school with.
Seems like a great use of an archive, in that the information for the story came from some of my writing, and photographs came from the collection of long-time archive supporter the late Ted Nikolaison’s collection.
The book launch was at Pukaha Mount Bruce National Wildlife Centre, and the local paper published this picture of the auther Ali Foster, Shirley Welch and the illustrator Viv Walker, herself a remote cousin of the Welches. 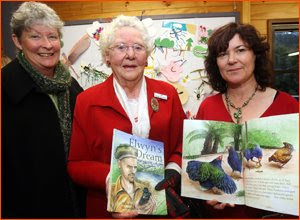 The family has come to light with extra treasures, in the form of correspondence and papers relating to Elwyn’s work, plus movie film from the time. I was shown it yesterday, and promised it will be coming our way soon.
Makes me wonder what next week will bring.
Posted by Archivist at 9:58 AM