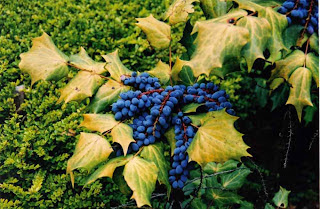 There are plants that are almost too reliable, an odd concept though that may seem to many gardeners. You know the sort of plants I mean. They cope with cold and wet places, they flourish in dry and warm sports - they tolerate quite shady areas, but they also seem to manage full sun as well. They flower reliably each year and frequently give an autumn display or a fruiting show in the winter. And we neglect these hardy plants because they are not quite showy enough for our tastes.
Surely the shrub that best fits into the category is the deeply unfashionable holly grape, the Mahonia. There are about seventy of these northern hemisphere shrubs and small trees, distantly related to the barberries, and with prickly foliage. They tend to make very architectural looking plants, with multiple stems carrying tidy and interesting-looking leaves. They mostly flower over the winter period – that is what made me think of them this week – with racemes of bright yellow flowers about 20 cm long, and often follow this flowering season up with a display of grape-like fruit. The prickly leaves and the vinous fruit have obviously led to the common name.
These shrubs are enormously popular in the United Kingdom and in America, partly due to their hardy evergreen nature I am sure, but have not earned the same following here. Probably the most popular is M. lomariifolia from Burma and China, with what some claim as the most beautiful leaf design of any ornamental shrub. Botanists among you will know the name “Lomaria” as it is the Latin name for a genus of ferns (some of which are found in New Zealand) which gives a good indication of the leaf type. The flowers are carried erect, while the fruit, which has a lovely white powder over it, is blue-black.
When you buy one of these it usually comes as a single stem, but as it grows, more branches will appear from the base until it makes a nice little thicket. The effect is enhanced by the way each of these stems is a different age, thus a different height.
This is a reliable old performer, although it will do best in semi-shade and in slightly acid soil. It is an obvious plant for among smaller growing Rhododendrons and the like, but looks equally good among a more modern planting with natives and grasses.
A more modern form ‘Winter Sun’, is starting to become popular, and is similar.
Posted by Archivist at 11:20 AM