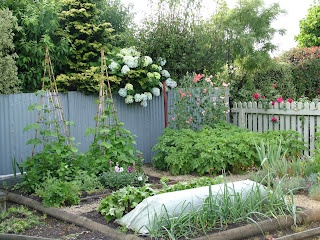 Last week I wrote about the upsurge of interest in vegetable gardening. It is almost a lost art among the young, and it is perhaps it is us baby boomers who are to blame. We were brought up with our father’s assiduous vegetable gardening habits as part of our cultural background, but as we grew up and questioned the values of our parents, we somehow threw gardening out the window.
Mostly, our children did not spend time in the garden with us, and we did not raise them to understand the joys and thrills of picking their own fresh produce.
It is time to start encouraging them again, and letting them see just how rewarding vegetable gardening is.
Last week I explained the procedures for making a raised bed for vegetables. I mentioned how suitable a number of different crops were for this process, but did not talk about potatoes. Partly this is because potatoes are slightly demanding of space, but they are very amenable to raised bed cultivation and will quickly reward the tyro gardener. And if we get underway soon, even the greenest gardener can produce some potatoes for Christmas.
This is the time of the year to start thinking about planting potatoes. Firstly, pop along to your garden supplies shop and select a bag of your favourite type. Do not be put off by the wide range of varieties available. There are many, many different types on the market today, and it can seem a little daunting. I suggest you get a reliable early type. The ‘early’ designation refers to how long the potato takes to mature, rather than the time of the year it should be planted, so you can plant ‘early’ types late in the season – sounds a bit silly doesn’t it?
Once you have purchased your seed spuds, they should be sprouted. Just place them with their eyes upwards in a cool, dry but well-lit area – I use the glasshouse bench but a window sill away from direct light will do just as well. The eyes will sprout and once they are about 1 cm long the seed is ready to be planted.
Now the fun begins.
If you are growing in a traditional manner, you need to make some furrows for the seed. The seeds are placed sprouts up in the furrows, and about 10 cm of soil placed over them. As the sprouts grow taller, the earth excavated from the furrow is placed on the sprouts until you end up mounds of earth. The new potatoes form on the stems as they grow.
But with raised beds that process can be a whole lot easier.
Firstly, use a bed that is only about half-filled with soil. Place the seeds on small depressions in this soil and cover with a generous layer of straw. Water this in very well, and then add about 10 cm of soil. As the sprouts grow, just keep adding more soil until the plants are growing in a tall mound, as in an open garden. You should ideally keep mounding until the plants flower and growth starts to die off. I always find the mounds have grown too tall for me to do that – and I run out of soil!
There is an important reason for doing this mounding. As well as allowing more potatoes to form on the stems, it is vital to keep the sunlight away from the developing tubers as they will turn green and poisonous of not kept covered.
I used straw for the first time last year. My beds are probably a hybrid – neither an old fashioned bed nor quite a modern no-dig bed either. I found the potatoes grew very well, and when harvested were a magnificent size – and very clean. I will definitely use this method again this year
Posted by Archivist at 7:50 PM

Interesting to hear how you grow potatoes. What varieties did you choose?

I used Red Rascal, and an unnamed Maori potato - purple-skinned and fleshed.