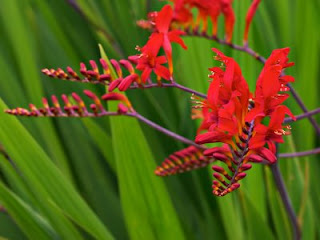 I have a dirty confession to make – I have some Montbretias in my garden.
This is a shameful thing to admit because Montbretias are a pest plant in many parts of New Zealand. Their ancestry in damp and warm areas of South Africa has allowed them acclimatise to New Zealand conditions with startling rapidity.
At this time of the year river banks splashed with burnt orange can be found all over the country. Last year, when I walked the length of the Ruamahanga River, I found wild samples of these weedy corms in big patches along the river, coming across my first clump underneath the first road bridge across the river at Mount Bruce.
Since then I have found clumps further into the hills, but still alongside streams, indicating their method of dispersal - they move along in the floods and when they find themselves stranded on the banks, put down roots and set up home, eventually starting a family who, in turn, migrate downstream.
Montbretias are in fact Crocosmias – Montbretia is an old fashioned and osolete name. They are native to south-eastern South Africa, and are mostly winter deciduous bulbs. They are members of the vast iris family, with flowers that look a little like an orange or yellow Freesia when seen up close.
The problem plant in New Zealand is the hybrid Crocosmia x crocosmiiflora, first bred in France in the nineteenth century. It has been extensively developed in England, when it is a popular garden plant. The English winters make this a slightly tender treasure in all but the southern counties.
There are some non-invasive species and hybrids suitable for New Zealand gardens. The one I grow in my garden is C. masoniorum ‘Lucifer’. As you would expect, this has bright red flowers, and has received awards in the United Kingdom. It is popular all over the gardening world.
There are other varieties available. Well-regarded English plant breeder Alan Bloom (yes, I know his name is a pun!) breeds many perennial plants at his Bressingham gardens, and he has been playing with Crocosmias. The wonderful butter yellow ‘Jenny Bloom’ has recently been released in New Zealand, and is a variety to keep an eye out for.
If you do have a patchy of the weedy forms, do your best to get in under control, especially if it is on a waterway. Small clumps can be dug up, but larger ones are best treated when they are growing strongly, with a dose of Round Up or something similar.
This great image from the University of British Columbia webiste www.ubcbotanicalgarden.org
Posted by Unknown at 8:59 PM

O, my! Yes, I have it! And you are SO RIGHT, it spreads as... I don't know what, but it spreads wildly! I have a variety with red-orange flowers. First, I loved it, now I am scared! It takes over my flower bed! Thanks for your post and all the information. I will get it out from the bed and put somewhere close to the woodds.Thank you, thank you, thank you!

What's tricky is when a beautiful plant has an evil sister that spreads like that. Wish everyone knew as much as you do about identifying them. And really wish the invasives were illigal in the nursery trade...Great post!