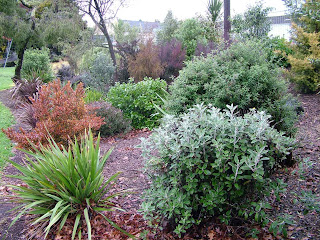 It has been an interesting gardening week, even though the weather has been terrible. These weeks with rain every day do not do a lot for the gardening spirit, but I did manage to get one or two important jobs done, none more so than my annual pilgrimage to a small local park. The reserve was named in honour of the well-known plantsman and plant breeder Laurie Robinson and his family have taken it upon themselves to rejuvenate it.
For some years the reserve was allowed to become slightly overgrown, and a jungle of unattractive trees and shrubs established themselves along the southern boundary. For four years the family had been cleaning the park up and replanting the fresh ground with a variety of native trees and shrubs.
I was delighted to be asked to be part of the team that does the planting.
One of my earliest horticultural memories is of Laurie Robinson spending an hour one Saturday morning, giving me a tour around his nursery and showing off some of his special plants. He took me into a secluded private area where he was bulking up some special red flaxes, the variety that was eventually released as ‘Ruby Dazzler’. It was nothing like the very modern flax varieties, with their mix of brown, pink, cream and yellow – it was purple leaved with a flash of red – sometimes. It was not the most stable of plants, and often reverted to just purple. I do not think it is on offer in any new Zealand nursery today.
I was thinking about my memories of Laurie as we planted another hundred or so shrubs into the embankment on Saturday. He would have approved of what we were planting, but many people would not be happy there was a fair sprinkling of modern cultivars among them. Many people would prefer that ‘native’ plantings were confined to naturally occurring species, and that no cultivars would be allowed.
Others go a step further, insisting that only ‘eco-sourced’ material should be used. Plants are only raised by seed, not by cutting, and the seed has to be gathered from the closest possible naturally occurring stand.
This is an important concept when you are considering revegetation projects, as there is considerable genetic variation between different strains of the same species. Some plants, kowhai being a great example, are very widely divergent throughout New Zealand, and they are also very promiscuous – they will readily cross with each other. If we used a west Auckland species, for example, in a major rural planting, we risk bringing a new set of genetic factors into the local population.
There are some examples of some plants that could have an influence on their environment. I am sure botanists are worried about the widespread planting of the strong-growing Renga lily, Arthropodium ‘Matapouri Bay’. This has successfully colonised the nursery industry and is planted extensively throughout much of the country. It will now be spreading its Northland genes through all sorts of other wild populations, perhaps changing them forever.
Having said all that, I am sure we are doing the right thing by planting cultivars into the rejuvenated Robinson Park. We are not undertaking a revegetation project, we are creating a garden and the hybrid Hebes, Coprosmas, and even the golden totara, all look in place.
Posted by Unknown at 5:56 PM