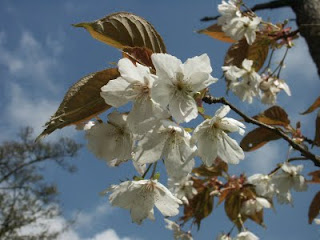 I have been thinking about English playwright Denis Potter this week, as the first flush of Japanese flowering cherries hit their peak. In a famous interview with the novelist Melvyn Bragg, Potter, who had recently been diagnosed with the cancer that was to kill him, described the view out his window, looking onto a plum tree in full flower. He said what he saw was “the whitest, frothiest, blossomest blossom that there ever could be”.
The past few weeks have been brilliant for blossom lovers. The relatively warm weather of August pushed cherries into flower a little earlier than usual, and they somehow managed to flower through a week without any substantial wind. And the effect has been magic, with huge clusters of flowers gradually building to a crescendo, then slowly going past their peak, and silently dropping confetti-like petals on to the ground beneath. If only every cherry flowering season could have been like this!
No wonder the Japanese go to such trouble with the Cherry Blossom Festival each year, as they since the 7th century. The festivals are held throughout the country to celebrate the arrival of spring. They are so important the national weather forecast includes a blossom forecast leading up to the celebration.
These trees have it all. In the main, the foliage is clean and attractive through the main growing season, often with the bonus of interesting new leaf colour in the spring, and a correspondingly exciting autumn colour later in the season. Even in winter, many of the varieties have interesting branching patterns only made obvious when the leaves have fallen.
Most of us think the very full double pink cherries when we think of flowering cherries, but interestingly enough, it is mainly the single white forms the Japanese treasure. They especially value these for the midnight viewing sessions they participate in.
Probably the variety they most treasure is ‘Taihaku’. This forms a tall growing tree with a large rounded crown, and has the most spectacular large single white flowers. These saucer-shaped flowers are slightly fragrant, best noticed in the warmth of a calm afternoon.
‘Shirotae’ is the famed Mount Fuji cherry, which forms a flat-topped tree with tiered branches that often droop to the ground. The pure white flowers are sometimes single, sometimes semi-double, and are scented of hawthorn.
Posted by Unknown at 9:05 PM