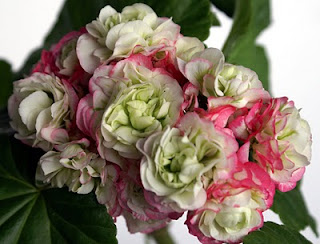 Some plants just do not get the respect they deserve. Perhaps they are too easily grown, and maybe they are too closely associated with working class gardens, but some plants are never given the credit they deserve, and are not planted often enough nor thoughtfully enough in our gardens.


Perhaps the best example of that is the poorly regarded zonal pelargonium, more usually known as the bedding geranium. This free flowering, summer blooming succulent-stemmed shrub is very popular in many parts of the world, but here is relegated to municipal bedding schemes and the like.


It  is a travesty as this wonderful plant has any amount of colour, it is drought and wind hardy –not so keen on frosts of course- and is as reliable as anything through the summer. In some more northern areas of the country rust can be a problem, forming on the undersides of the leaves, but this far south it is nowhere near as bad a problem, and zonal pelargoniums are unlikely to be bothered by too many diseases.

There are many thousands of different kinds of this adaptable and versatile plant, some grown for their colourful leaves –the “zonal” in their name refers to their leaf markings – others for their brightly coloured flowers, while yet others are treasured for their exquisitely shaped flowers.
Perhaps the most commonly seen forms today are the seed raised varieties offered for sale in garden centres and supermarkets. These are raised from very dear hybrid seed, and have been developed overseas for the potted plant trade. In most of Europe and America, these plants are largely grown to be planted out for a season then discarded. Traditionally the bright red forms are the most popular – often planted out with white petunias and blue lobelias to give a very patriotic garden - but the hot pinks are also very popular today.

One colour that has been taken up with fervour by some local councils is the “orange” strain. This is not orange really, but is an orange-ish form of scarlet, and is very effective in the garden. I have seen it bedded out with greenish Nicotiana plants, and the beds work very well. This would also work a treat if you had a terracotta planter or wall to work with.

Just because these are raised from seed does not mean they cannot be kept going from cuttings. Most of you will know that these plants are ridiculously easy to strike. I just snap a stem at a node, and leave it in a shady place for a few hours. This allows the cut area to form a little callous, which stops it from rotting before it can root. Then I just pop the cuttings into a sharp potting mix – I usually add some pumice to a standard mix – and watered well. They will usually have rooted after a week or two.

I was recently visiting as gardening friend, who always has a wonderful collection of unusual and choice plants to see, and she gave me a cutting of her scarlet red rosebud form, which is now happily setting roots in the glasshouse. My favourite among these, though, is the eye-catching “Apple Blossom Rosebud”, which has extremely full flowers which have a greenish centre, white petals and bright pink edges.

I for one love them and have many I have kept and overwintered for the next springs. I add a couple new varieties to the collection each spring. Love the double budded ones they now have.

Hello!
You may probably be very interested to know how one can make real money on investments.
There is no need to invest much at first.
You may begin earning with a sum that usually is spent
on daily food, that's 20-100 dollars.
I have been participating in one company's work for several years,
and I'll be glad to share my secrets at my blog.

Please visit my pages and send me private message to get the info.