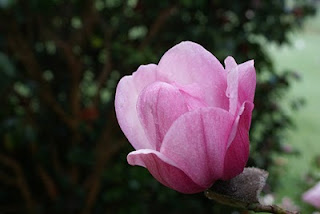 This has been a remarkable season for deciduous magnolias – the best I can remember in years. We have gone through a sustained period without any strong frosts and that has meant that the buds, so often cleaned out by the cold weather, have been able to mature into full blooms, and have been spectacular.


Among those to look their best this year have been the various forms of Magnolia campbellii, with their stunning pink flowers, and the amazing white M. denudata ‘Alba’. There are not too many of these trees in our inland location, partly I guess because the flowers are so frost tender that it can be a heartbreaking occupation growing these beauties. They are also very reluctant to flower early in their lives – we always used to tell people it could take up to 15 years before they would settle into flowering.

If you want to play it safe there are always the very hardy old forms of M. x soulangeana, which are reliably hardy although they are perhaps not as entrancing as modern hybrids, tending to be thinner, tulip-shaped, and often rosy purple flowered. These are the giant magnolias that grace most suburbs in established New Zealand towns. We don’t have any in our garden, but in our neighbourhood there are trees nearly 20 metres high, and they are covered with flowers at this time of the year.

As they grow they take a very pronounced rounded form, which looks slightly eerie over winter (some kids call them witches trees!) but come the spring, when covered with their multitude of two-toned flowers, they are just amazing.

The newer hybrids are a great advance, and over the past fifty years or so, New Zealand has led the world in producing M. campbellii derived hybrids in an amazing range of colours, with increased hardiness and more precocious flowering, as well as reduced size.

The initiator of this progress was Felix Jury, one of the well-known plant breeding family from Taranaki. He had ordered a plant of the M. campbellii form called ‘Lanarth’ from England, but when it first flowered it was immediately obvious that it had been sent in error and was not true to type, but was nonetheless very attractive so he released it, calling it ‘Mark Jury’ after his son.

But things did not stop there. He used this as a parent, crossing it to more compact forms, and developed a wonderful collection of hybrids, including the enormously flowered pink form, ‘Atlas’, the lovely two-toned ‘Athene’, the delectable pink ‘Serene’, two stunning white forms, ‘Lotus’ and ‘Milky Away’, and the remarkable creamy pink ‘Iolanthe’, with its long lasting flowers.

‘Iolanthe’ flowers young, with giant saucer shaped creamy pink flowers that are borne along the branch, not just at the tip as is the common way, meaning the flowering season lasts longer than most other varieties.
Posted by Unknown at 9:04 PM

I just came to know of it yesterday morning. Bookmarked this and also stumbled upon it. Thanks a lot man. You had some nice ideas in the article. I enjoyed reading it.
--------------------------
Pokerstars Full Tilt Party
www.pokermaniak.com.pl
www.pokermaniac.eu
Texas hold em iPoker bonus code
Carbon Poker offers all new players a 100% bonus on your first deposit up to $ 600. In addition, each player receives 14-day access to daily freerolls with guaranteed prize pool of $ 500. Impressive VIP program is an additional cash bonuses and gifts. If you are looking for the best online poker bonus "loyalty program", download the Carbon Poker and start playing now. Carbon Poker offers the opportunity to play all the popular poker poker games including Texas Hold'em, Omaha and 7 Card Stud Hi versions and Hi / Lo, 5 Card Stud, 5 Card Draw, HORSE, Triple Draw and Badugi.
Whatever your preference, every poker player will find the widest variety of poker games - each game is available in both the real and the virtual money.
www.poker-no-deposit.eu
Pokersource Pokerstrategy Bankrollmob
Poker shark play holdem
free online sponsorship money
The objective of the Carbon Poker was the most faithful reproduction of a live game. As a result, Carbon Poker has a number of unique features not available in other online Pokers, including: the possibility of Hands twice, the "Run it Twice" (as in the show High Stakes Poker), the ability to fold and show one or two cards , the "Rabbit Hunt" that is able to verify that the card would reach the next (when rivals fit liner before all the community cards).