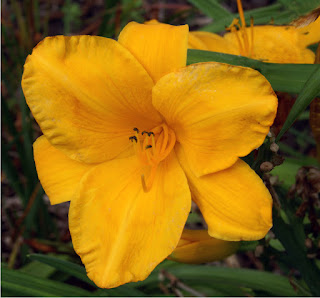 At this time of the year our garden suffers a little from “Yellow Fever”.  I do not mean that the Head Gardener and I take copious weekends off and head over to Wellington to watch the Phoenix soccer team (although we do that occasionally) .  No, what I mean is that yellow starts to dominate the flowers in the garden, with many brightly coloured perennials coming to the fore.
Primary among these are the delightful day lilies, Hemerocallis, one of the most popular of all perennials in the United States, yet somehow neglected in this country.
Both the common name and the Latin name refer to the flowers’ ephemeral life span – literally here today gone tomorrow for these guys.  Hemero is Greek for “one day”, while “callis” means beautiful, so when the great plant classifier Carl Linnaeus was looking for an appropriate name for the genus in 1753 he hit on Hemerocallis.
Originally found in the wild in China, these plants have been hybridised for many years now and a wide range of plant forms and colours is available, although it has to be said that the yellow and orange shades probably still predominate.  Many gardeners have been familiar with the old thin-petalled yellow flowered varieties and are rather surprised when they see more modern forms, with their deeper colours, stronger texture, and much wider range of colours.  We grow a number of yellow and reddish forms, as well as one lovely deep mahogany variety, which we planted in our dark coloured border.
Daylilies are very hardy and will cope with anything the weather will throw at them in Wairarapa – they will bounce back from cold very well and will cope with drought reasonably well too, although they do like the occasional drink during the heat of summer.
There are two different growth habits among modern daylilies – some go completely dormant in winter, the leaves dying off completely for the colder months, while others remain evergreen right through the year.  I grow both forms and have to say the dormant forms are probably tidier in the garden as their dead leaves are removed as part of the usual autumn tidy up, whereas some of the evergreen varieties mainly shed their dead leaves in the following spring, and you can end up with a plant covered in flowers, but also with dead and dying leaves in the middle of the clump.  It probably pays to check which form any variety you buy is
Although day lilies will grow quite happily in most soil types, they do best in well fertilised, well drained light-ish soil.  We have some growing in quite stiff clay and although they are growing alright, they do not compare to those growing in better soil.  You can also grow these summer beauties in large containers, using a robust container mix.  If you do not have any, you could make up a variety of the old John Innes mix – equal parts of good garden loam, peat moss (or composted bark) and well rotted animal manure.
Day lilies are true long-lived perennials, with fibrous roots are varying from thin to fleshy and tuberous, extending from the crown, which is also where the leaves and flowers emerge.  They are very easy to divide and increase – just find where the fans are connected at the crown of the plant and carefully cut or pry them apart. You will find that some of fans are not properly connected and you will only need to disentangle their roots.  Try to be very careful when undertaking division because even though snapping some of the roots is very hard to prevent , it is important to keep as much of the roots as possible. If a fan snaps off of the crown without any roots you are doomed ­– the leaves will not grow new roots.   These are vigorous plants, so when replanting make sure you leave enough room around them for their expansion!