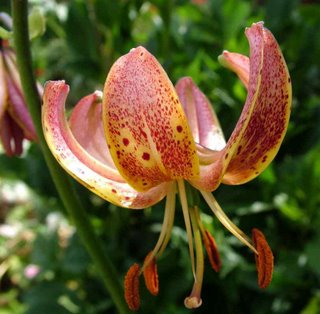 In the depths of winter, it is always a delight to think of the warmer months ahead, and the promise of regeneration in the garden. Although it is wet (very wet actually!) and cold at the moment, it will not be long before we notice that the days are lengthening again, and we will soon be talking about the first of the spring bulbs. The early spring crocuses, the C. chrysantha hybrids, are already starting to bud up in my glasshouse, and I notice that some of the snowdrops in the garden are showing signs of being in flower very soon.
And then there is the absolute delight of sitting inside, out of the rain and cold, planning new plants for the upcoming season.
I have been trying to decide whether I have enough room for some more lilies. I am always looking out for room for new plants and, because lilies are a little bit fussy about where they grow, I need to plan carefully.
The first and most important thing to take into account is their absolute need for good drainage. My mother used to garden on very poor and wet soil. Each year she would save up, buy a Lilium auratum, and nurse it carefully. She often managed to get two seasons out of the one bulb, but, at least equally often, only got the one flowering. Undaunted, she would be back the following year, buying yet another of her favourite lilies.
I am not sure why she did not grow some of the easier varieties, like the ubiquitous Christmas Lily, Lilium regale. This seems to be a requisite for the Kiwi Christmas for many families, including the Head Gardener’s. I had never struck this tradition until we met, so I was a little puzzled about the need to have vases of these lilies for Christmas. Being the compliant gardener that I am, I turned my attention to growing some for her – well, to be more honest, they were growing in the nursery garden when we bought it, so we always had a good supply for the house.
When we sold the nursery and moved to our present garden I wanted some again, so I brought some of our clumps with us, but I also grew some from seed. They have turned out to be gigantic! They flower at over two metres high – too big to pick – but they make a great feature at the end of a perennial border, and they scent the garden marvelously in mid-December.
I also grew some other species from seed so I have a scattering of these through the season, including some of the hardier species, including L. hansonii. We also have a clump of the unremittingly cheerful Tiger Lily, Lilium tigrinum – not a specialist’s lily but great value in mid-to-late summer.
It is, of course, the showier cut-flower lily varieties that are easier to procure nowadays, and a good range of these are currently available at garden centres and at nurseries.
I share my mother’s delight in the L. auratum varieties, and I have a number of different types in the garden, both out in the beds and in some pots near the house. The type species is the famed golden-rayed lily of Japan, although it is seldom seen nowadays, being largely replaced by the Oriental Hybrids.
There is a lovely range of these, mainly in the red trough pink to white shades, although in some varieties such as ‘Conca D’Or” the yellow banding of the petals has been increased to give a yellow-ish effect. I particularly love the many pink hybrids and the whites with red bands down the petals, although other gardeners prefer the deep red varieties.
No matter which one you pick, they have the most amazing scent – deep and spicy, and even more powerful than L. regale. I have a clump growing near the swimming pool and it is a marvelous feature in the cool evening summers, when the pale pink flowers glow and the whole garden is scented.
Posted by Archivist at 9:37 AM