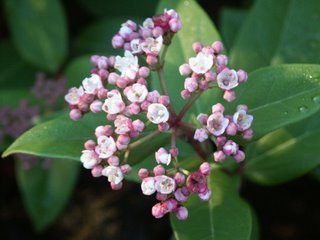 In one of my horticultural incarnations I used to help design gardens. I was always careful to ensure that my clients could not see that I had designed their particular patch. I reasoned that if the garden properly reflected their needs you should not be able to see the designer’s hand in the eventual garden.
There were obviously others working in the same landscaping field, and I noticed that I could easily differentiate between their works just by looking for their signature plants, the ones they used in all their gardens. I was determined not to fall into that trap.
There is another real trap for the beginning garden designer – professional and amateur alike - and I saw a great example of it last weekend. I was lost in a nearby town and driving around pretending to be looking at gardens. I found myself in a deep cul-de-sac face to face with a very pretty winter garden, filled with heathers, South African Ericas, Rhododendron ‘Christmas Cheer’ and any number of Camellias. I knew immediately that the garden had been planned and planted at this time of the year. Whoever planted the garden must have gone and picked all the flowering shrubs in the garden centre in August. The garden looks superb now but it will be a plain looking this later in the season when all the late winter flowering shrubs have finished.
One plant that was looking nice in that garden was one that I have just planted myself, to help hide the gap left behind by the hebe hedge. I needed a few evergreen shrubs to fill in the large gap along the front boundary and was interested in getting some winter colour built in as well. The garden has a good number of camellias and a few rhododendrons for later in the season so I thought that maybe I would plant a Viburnum tinus for my late winter colour.
This is an old-fashioned favourite that seems to be undergoing a bit of a revival now. It is a tough, reliable performer and was planted in many Victorian shrubberies, where its dark green leaves and resilient nature were much appreciated. It went out of favour for a while as it can be prone to attack from red spider mite, leaving the plant looking decidedly unhappy, with silvery foliage and a degree of dieback. This infestation is prevented relatively easily with a careful spraying programme and shouldn’t deter anyone from planting this shrub.
The type species grows to about two metres – at least according to the books it does, but you can add another metre to that at least. It makes a lovely rounded shrub and will grow to have about the same girth. That would make it too big for the front of my garden so I chose a smaller growing form known as ‘Eve Price”. Like the original species this has dark green shiny foliage, covered with red buds at this time of the year and earlier. Over a matter of weeks all these buds open to creamy white flowers. In the late summer there will be a crop of blue-black berries, but don’t plant the shrub for them – they are not that exciting!
This is a great, tough little plant for an exposed site. It can cope with wind, rain, drought, sun, coastal conditions, frost – and it is attractive as a bonus. It will make a tidy low hedge, planted at about one meter intervals, and will probably only need clipping once a year. It grows about 1.2 metres by 1.2 metres. It can be kept smaller of course.
There is another taller form, called “Emerald Beauty” that is sometimes offered – it is too tall for my purposes but is very attractive.
The other form that is sometimes offered in the trade is the oddly coloured (and dreadfully named) “Bewley’s Variegated.” This has green leaves deeply coloured with deep yellow splashes. The effect actually looks surprisingly drab, but if variegated shrubs are your thing I guess you will find the combination of green, yellow, white and red to your taste.
Posted by Archivist at 12:30 PM

Thank you very much for yor comments re viburnams. I have been agonizing on which tinus to recommend for my sister.