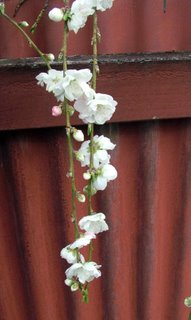 Over the past couple of years, I have been watching the progress of a couple of newly planted trees just down the road from our garden with great interest. The house was sold and new gardeners came. They kept much of the planting but they replanted a bed alongside their driveway, which had previously featured a row of standard ‘Iceberg’ roses in a box-lined bed. I like ‘Iceberg’, but I believe the row of standard white roses has been overdone in recent years, so I was intrigued to see what was going to replace the roses.
I would never have guessed what the new plants would be though – a couple of weeping peach trees.
Of all the various flowering fruit trees, the peaches are the least planted nowadays, although at one time they were very popular. My grandparents had a spectacular deep pink variety in their garden and it was a delight each spring. I think the best upright form of this tree, though, is the pure white double flowered ‘Iceberg.’ The white is intensely pure, as the name would suggest - it glistens.
From this tree came the weeping forms grown in New Zealand, ‘Cascade’ and ‘Pink Cascade’. ‘Cascade’ was the first weeping form to be released in New Zealand, and has the pure white flowers of ‘Iceberg’ – or at least, it mostly does. The plant is not stable as it throws pink flowers on some branches, so the effect is slightly softer. The growth form is gently weeping and when planted against a dark background, as the tree down the road is, the effect is very dramatic.
The light pink ‘Pink Cascade’ was selected from the white form, and has the same growth habits. The colour is fairly stable, although it does seem to throw the occasional rogue flower.
You do need to exercise a little care with flowering peaches in the garden on two counts. Firstly, they are rather prone to the same diseases that fruiting peaches are, in particular leaf curl. It probably pays to spray copper oxychloride at bud burst to keep this pest in check.
The other potential problem is silver leaf. This disease can attack large trees, usually when they have been heavily pruned. If an infection is noticed quickly enough, use of the natural remedy Trichopel will keep it at bay. Otherwise it is a case for the chainsaw I am afraid, as this disease will rapidly spread.
Posted by Archivist at 5:39 PM