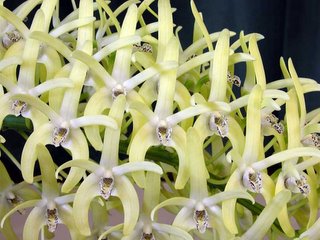 One of the amazing things about the plant world is the sheer diversity it contains. The term ‘plant lover’ can cover an enormous range of interests.
I had thought my plant interests were fairly well defined, and that I was of an age when I was not going to fired by a sudden enthusiasm for a new class of plants. Then, just last summer, I found myself getting all excited about native orchids.
I have always like visiting orchid shows, although I have been resolute about not growing too many plants as I have enough trouble keeping my other enthusiasms under control. I like looking at the large-flowered cymbidiums and other forms, but it is the small-flowered species that get me.
Last summer I made a few forays into the ranges near home and found that the highlights of my journeys up into the alpine herb fields were the various orchids I found on the way up, and sometimes even on the way down!
When I go to an orchid show I make a beeline for the more unusual species on display.
I have a fascination with the Australian Dendrobiums, and it will be the display of these trans-Tasman beauties will be the first stand I visit. These are relatives of our native Winika cunninghamii, with delightful tiny flowers of typical orchid shape.
Our Australian cousins have a much bigger range of species and hybrids to choose from. The species that grabs me the most is the charming little rock orchid D. kingianum (more properly now called Thelychiton kingianus – really!). This grows wild from northern New South Wales up into Queensland, on rocks usually, as you would expect, but also sometimes on trees.
It is a small growing plant – maybe around 20 cm high – and has up to seven flowers per pseudobulb. These flowers are now available in a huge range of colours from white through to seep purple, although most are in the pink range.
Although these guys are not frost hardy they will stand quite cool conditions and are easily grown. If you can grow Cymbibiums you can grow these guys as well. Being dwarf they do not need large pots and will thrive in small plastic containers. At the shows there are always some huge clumps of these plants, in large pots, and the sight of hundreds of these flowers fluttering over the dwarf foliage is really something to savour.
D. speciosum (now also a Thelychiton) is a cousin of the rock orchid, and will readily form hybrids with it, but has a completely different form. It has tough leaves to about 40 cm high, topped by racemes of white to cream flowers, up to 120 flowers on each stem. The flowers are often finished of by purple markings on the labellum. It is a charming plant, with the large racemes drooping and displaying their flowers freely. The flowers are deliciously scented as well – very noticeable in an enclosed hall.
As you would expect, these two plants have been hybridised, and not just by keen orchid breeders either – they will cross in the wild when their growing areas overlap. The hybrid is known as D. delicatum, and is quite variable, but in the wild it is usually creamy coloured with purple markings on the labellum. The flowers are intermediate in size, and not carried with the abundance as D. speciosum, but are nonetheless still numerous. In cultivation these have been crossed with some of the darker forms of D. kingianum, with a bigger range of colours now available.
All of the above are quite straight forward to grow. Their main need is for absolute drainage – they will not grow in soil, or even in normal potting mix. In the wild they are lithophytes (they grow on rocks) and they need very sharp mix. The standard mix is composed of very coarse pine bark chips, or something similar.
During the growing season these plants will need watering most days but in the winter the watering can be held back to about once a week, or even less.
Posted by Archivist at 9:29 AM

If you want to know more here it is
home based business
www.home-businessreviews.com

Hi friends
Do not miss your chance to get a free ipad. Visit http://bit.ly/d9QOON