The last weekend of September was a very interesting one for the Head Gardener and I. A spell of fine weather that followed a welcome dose of rain left the soil in wonderful condition so a large part of the weekend was spent with backs bent and rakes, hoes, spades, shovels and dibbers at the ready.
Saturday afternoon, though, we spent a bit of time in the capital city, ostensibly to pick up our son but really to have a bit of time in the Botanical Gardens. It was not a great day weather-wise in the gardens, but the beds were at their early spring best. The display of tulips of contrasting colours had drawn a large number of spectators, happy to brave the cool wind and the drizzle. The tulips were stunning – large healthy well-grown specimens in perfect patterns – not to everyone’s taste but nonetheless a memorable sight.
The sights that will stay in my mind, though, were the newly emerging leaves on the Japanese maples, and the virid light they imparted. There were especially beautiful in some of the sheltered dells where they serve as cover for a wide range of damp-loving species.
One of these species caused us a bit of grief.
I spotted a clump of the yellow skunk cabbage (and what a name that is!) Lysichiton americanus, in a bed alongside the duck pond. I was so taken with the clump that I stopped to take some photographs. We then continued on our way, looking at the main beds with their tulips, and wandering through the small pine trees, up the ridge and down into the Lady Norwood Rose Gardens.
As we approached the large glasshouse I suddenly realised that I didn’t have the car keys with me, so we carefully, and sullenly I have to say, retraced our footsteps. I had a hunch that I might have put them down when I photographed the skunk cabbage. Fortunately that turned out to be the case, and we found the keys hidden just inside the bed. We were able to move forward again, albeit on a different pathway.
So, the yellow skunk cabbage -it caused us so much grief I have to tell you about the plant. 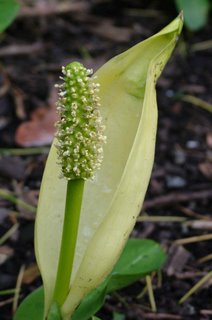 As you will see from the photograph, it is a member of the large family of plants called the Araceae, most familiar to most people by the common arum lily. Like the arum, the Lysichiton prefers moist soil, with good humus content. It will grow in sun or part shade. It is at its very best, though, in damp areas alongside ponds or streams where, if it is at all happy, it will even seed and establish itself.
As with members of the Araceae what appears to be the flower is in fact a sheath that covers the actual flowers. The sheath appears from the ground in early spring, wrapped around the spadix – the stem that has the small flowers spaced along it.
Unfortunately it shares another common trait of many members of the Araceae - it is fly pollinated, and as such uses a very traditional way of attracting flies to the flowers.
It stinks.
It has a heavy musky scent which unpleasant but it is not as absolutely foul as some of the more lurid members of the family.
Each year or so someone comes to see me with tales of a lily that has just appeared in their garden. They have never seen it before and that it has large flowers like an arum, except they are black. And everyone says the flowers stink. 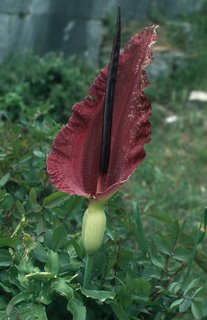 What they have in their garden is commonly called the “Stink Lily”, “Voodoo Lily” or the “Dragons Flower”, but it is known to botanists as Dranuculus vularis.
Unlike the yellow cabbage yellow this plant comes from Mediterranean Europe and prefers freer draining soil. It has attractive green leaves with white markings, arranged around the snakeskin patterned stem. The flowers, though, are the thing.
And what a thing they are. The spathe pops out fully and tightly closed, greenish brown, with deep markings on the edge. When the spathe opens and the spadix is finally exposed it comes in the most lurid maroon, and can be up to 1.5 metres long. It is sometimes called “amorphophallic” by botanists. When I tell you that “amorpho” means “shaped”, I am sure you can work put how it got its description. As a matter of interest, I see some United States nurseries are now calling this the “Viagra Lily.”
This is an attractive looking plant, and the putrid smell (said to recall rotting meat) doesn’t last for long – maybe just one day. Just the same, don’t plant it by the front door.
I was pleased to see another old favourite in the gardens though, a form of the common “arum,” Zantedeschia aethiopica. The usual form is the common white form so heavily associated with funerals in the United Kingdom, and almost regarded as a weed in New Zealand. There is a very interesting green-flowered form called “Green Goddess”. It is brilliant in the damp conditions where the white flowered form grows, and it is a great flower if you like having different flowers in a vase inside. It was very popular during the time ladies were keen on joining floral art clubs, as it was perfect for many forms of floral display, and it is having a bit of a comeback again now, no doubt influenced by the increasing interest in large foliage and pool gardens.
My favourite among all these arums-like plants is a tiny little one I have in my glasshouse, just for the kids - the mouse plant. Arisarum proboscideum is a shade loving plant that grows about 15 cm high, with funny little flowers that look just like mice, especially when seen from behind. A great one for the kids to scream at!
Posted by Archivist at 9:09 AM