That big bad bed in my backyard 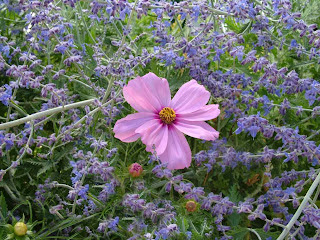 Cosmos in flower among the Pervoskia
We have been in our “new” garden for nearly ten years now. In some ways it is barely recognizable from the property we bought. Over the years, we have added many garden beds and extended others –some of the changes have worked well while others have been less successful.
I think that the biggest disappointment has been the large island bed I dug in the rear of our section. This part of the garden has a sleep out and a pool, and it is an area we spend a lot of time in summer. When we arrived there was a tiny strip alongside the perimeter fence so I greatly widened that (from about 30 cm to over three metres) and completely barked the whole area. There were a few native trees in the area - a lemonwood, a golden akeake and a silver matipo – but there was adequate light for most plants to thrive.
That has changed over the years. The natives are now tall and cast a deep shade over the bed and to I need to shift many of the perennials I planted when I first made the bed.
One idea in particular had been a bit of a flop.
I wanted a summery feel to the edge of the border so I planted a row of day lilies, Hemerocallis varieties. I bought ten different varieties from one of New Zealand’s top nurseries, but the garden was, even at the time of planting, marginal for such sun lovers, and as the shade has increased, they have done worse and worse each year. It is time for me to shift them to a sunnier place. 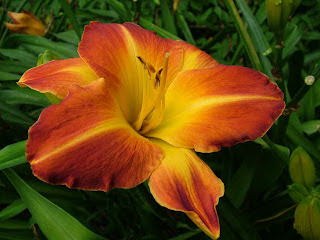 I made the large island bed to give us somewhere to grow the sun-loving perennials and bulbs we both love so much. I took all the turn of a large area then put trailer load after trailer load of chicken manure and compost onto the soil before digging it all in. At the time, I made the bed I remember thinking that the soil felt dry but I thought the addition of all the humus would do the trick and I would have great soil. We garden in thin, well-drained soil, and it usually gobbles up humus, but does give wonderful soils if treated properly.
The new bed soon proved to be a sticky mess. It seems most likely that the spoil from the pool was spread into this area, and the soil we have worked on have proven to be far from the free-draining humus rich soil I had envisioned. Bearded irises, an important flower for us, have proven to be hopeless in this bed – they sulk and they do not flower. We even have a devil of a job getting Montbretias to flower!
Most of us are aware of the weedy Montbretias that often line stream-sides and damp places in New Zealand gardens, but few know or grow some of the vastly better Crocosmia varieties. These have flowers that are three of four times the size of the weedy species and have a fabulous colour range from soft apricot, through the usual oranges, to almost red. I grow ‘Star of the East’, which has large flowers of soft apricot-yellow – only I hardly ever see any flowers. It has grown well enough and has formed a respectable clump, but just does not flower very well at all.
Other plants have flourished in the soil. The Hellebores that are a feature of one end of the bed do fine and provide lovely flowers in late winter, and some Dahlias have done very well too. One has even seeded, the white cactus-flowered form, giving rise to a lovely pink decorative.
Another surprising success has been the sun-loving Perovskia atriplicifolia ‘Blue Spire – and no, it does not seem to have a common name. This is a Himalayan shrub with the amazing combination of grey leaves, white stems and lavender-blue flowers. The form usually grown in New Zealand, “Blue Spire’ is an award-winning variety raised in Britain. The flowers are larger and bluer than the type species. It is not a tidy grower – it tends to sprawl and flip about a bit so make sure it has a little bit of room. The books all say it needs great drainage to succeed, so quite why it is doing so well in this garden I do not know.
The plants that have done well tend to be those derived from meadow-growing species. A couple of Siberican irises have flourished, as have some self-seeded Delphiniums. At the moment the highlight of the garden is the bergamot, Monarda ‘Raspberry Wine.’ 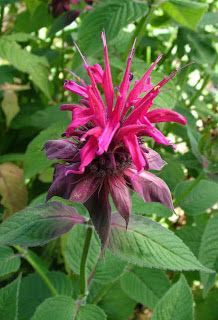 The bergamots have hooded tubular flowers atop strong stems – this variety grows about 1.2 metres high- and this bright raspberry-wine coloured form is lovely. There are other varieties in the purple-red-pink range.
The other plants that I am sure will flourish in this bed are the “queens of the summer border”, the Penstemons. These are brilliant value as they flower for months on end and are very hardy. The colour range is great too, and it would be possible to find Penstemon varieties to suit most garden situations.
We have a number of varieties in different beds but I have decided that I will plant up a number of these into this problem bed. I have already purchased a couple of forms that are happily bedded in. ‘Purple Passion’ has tiers of deep grape purple flowers that fit in perfectly with the other colours in this range in the bed, as does ‘Sour Grapes.’ I think I will plant the relatively new ‘Alice Hindley’ around the Perovskia, as her large pale bluish-lilac flowers will combine beautifully with ‘Blue Spires’.
It is surely one of the delights of gardening that gardens change with time and as they change, they allow different spaces for new plants. Meanwhile, I am looking for another new bed to plant those sun-lovers.
Posted by Archivist at 4:26 PM

For more on Hellebores: