This weekend has been an interesting one, as it usually is when my geneticist son David is home. His level of learning is now far in excess of my own, and his PhD research has touched on areas of New Zealand plant and animal life, so a chance to talk plants is always welcome.

We took advantage of his being home to go for a walk through the forest at Pukaha Mouth Bruce, timing our walk to coincide with the kaka feedings. I guess the purists will be a bit upset at the concept of feeding these wild parrots but to amateur naturalists is a great chance to see native parrots up close - and by up close, I mean up very close. As the kakas descend from the surrounding forests to take up their station in the trees they take little notice of the humans gathered to watch, roosting a metre or less from the spectators’ heads. It is an amazing experience to be able to stand that close to a wild bird, and for a photographer it is a dream come true.
One of the things David has been explaining to me is the latest scientific thought on the influence of Gondwanaland on our plants. Gondwanaland is the name scientists have given the giant supercontinent that held all the Southern Hemisphere lands including the land we now call New Zealand. We parted company with Gondwanaland about 80 million years ago.
The theory I was taught was that many of our ancestral plants came with us at that time, and evolved in the interim. It now seems that this is very unlikely. Much of what is now New Zealand was submerged during the Oligocene, about 30 million years ago, and most of our ancient plants seem to have arrived in the period following that. Many of them arrived from Australia, and we have many plants in common with our western neighbour, including tree ferns, manuka and southern beech trees.
But we also have a lot in common with South America, where relatives of many of our plants and trees are also to be found, along with a great many of the most popular flowers, trees, shrubs and vegetables for the garden.
Among the plants that first appeared in New Zealand 30 million years ago, as dated from fossil pollen, is the Fuchsia genus, New Zealand being the extreme edge of its range across the Pacific from South and Central America where it is centred.
The New Zealand species have a number of peculiarities that separate them from their pan-Pacific kin. For a start one species, the ground-covering F. procumbens, has yellow flowers (well partly yellow at least) and they face upwards. This is a coastal species and is not reliably hardy but is well worth making an effort to grow as it is very pretty. The light green leaves are charming, and the flowers, although on the small side, are also very pleasant. The main reason for bringing it into the garden though is the wonderful display of berries once the flowering season is over. The berries are relatively large and are bright red.
I grow species this in hanging baskets on the patio where we can see the flowers at eye level and appreciate them more, and where they will be out of the frosts in winter. 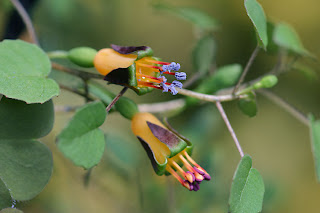 Fuchsia procumbens
The other Fuchsia that New Zealanders should be familiar with is the kotukutuku, the tree Fuchsia that is such a feature of the forest margins. This is a semi-deciduous small tree which bears a large number of small flowers, which again are followed by attractive deeply coloured berries. The berries are called ‘konini’ by Maori and are said to be very useful for jam making – something I have no experience at. Old Maori friends tell me that kereru, wood pigeons, taste lovely when they have been eating konini berries, but again I cannot comment – I’ve never eaten illegal Tegel.
The garden fuchsias we grow are not derived from New Zealand species, although there would be potential for some interesting hybrids if they could be persuaded to produce viable seed.
Our garden plants, with their wide range of flower colours, forms and growth habits, are descendants of early introductions of some of the nearly 100 species to be found in South and Central America. They were extensively hybridized during the first half of the nineteenth century and reached their peak of popularity in Europe in the second half of that century, when they were among the plants cultivated extensively under glass.
In New Zealand, we can grow our fuschias outside, even in frost prone areas such as the Wairarapa. I grow some in pots on the patio, others on a south-facing wall of the house, and still others along an east-facing wall of the glasshouse. These plants get cut back by the winter frosts but I just prune out the ugly dead pieces in the spring and they soon shoot away again. Those in more sheltered areas would hardly even need to do that. 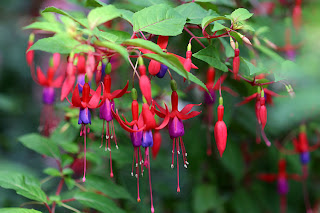 I like mine to grow in a natural fashion, but these plants are very easy to train. If you are looking for a stylish standard just keep one strong central lead growing, removing any side growths as they appear. Weeping varieties can easily be trained to grow in a basket by applying the opposite technique – just remove any leaders, encouraging side growth. This is, of course, easier on the varieties that have natural pendant growth – just keep an eye out when you are in your local garden centre.
These are no-fuss plants, but it does pay to keep an eye for thrips, which can attack the undersides of hanging baskets in particular. Just make sure you water the bottom of the leaves occasionally and they will be fine.
And just think. You’re growing plants that have been in New Zealand for 30 million years!
Posted by Archivist at 8:51 AM