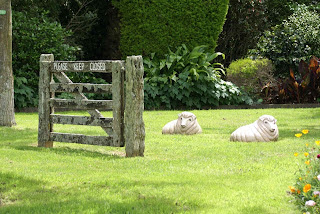 My children (and the Head Gardener too I think) say that I have a mortgage on silly jokes – “Dad jokes” they call them. I have news for them. I have found a garden filled with silly jokes, of the practical and unpractical variety in equal measure.
It is the extensive water garden in Ngatea called ….. surprisingly….. the Ngatea Water Garden.
I was driving north recently, going from Tauranga toward Miranda on the Thames Estuary to see the multitudinous bird life that gathers on the beach there. I noticed the large signs for the water gardens and decided that I needed a break in the journey. I didn’t expect to find quite the sort of garden I found though.
Roger and Emma Blake started this project in 1995 when they bought the 2 hectare property. Neither had a background in horticulture, but Roger’s engineering skills came in very handy as the couple set about constructing four large ponds on their property, using the excavated soils to help shape the gardens.
They were greatly helped by the extremely high water table on the Hauraki Plains – the ponds started to fill as soon as they were excavated. In total, over 5000 cubic metres of soil was shifted, and 300 tonnes of greywacke imported for building the rock features, including a large waterfall.
The ponds were cleverly designed with shallow areas near the shore and much deeper middles. This allows the water lilies and other aquatic plants to flourish near the shore, while also allowing the ponds to be relatively clean.
The water level in the ponds is almost self regulating – a 1 mm rainfall will mean a 3 mm increase in the pod levels, before the overflow system works. There are pumps to top up the water, but they are usually only used for about two months a year.
I wandered around the garden for over an hour, looking at the various highlights, jokes and plants. For part of the journey I was accompanied by a troupe of white ducks, no doubt thinking they would score a meal from me. They were to be disappointed.
There were a lot of different plants in flower in the garden, and they were very well labeled, so my camera was going mad. I was particularly interested in the Louisiana irises,, and the water lilies.
The Louisiana irises are water loving plants from the Southern United States, and unlike many so-called water plants, these are true pond-edge plants that do not mind being planted in boggy ground. They are vigorous plants, and have large flowers in a range of colours from near-red to blue, purple, white and yellow, with all sorts of combinations.
These are nowhere near as popular as they should be. They are easily grown in almost any garden soil except the very dry, and they are very hardy. For the water gardener they are essential.
Water lilies are a little trickier, although they are not as difficult to cultivate as most gardeners seem to imagine, and will provide many moths of glorious flower for the pond owner, or the tub owner for that matter.
There are many different types of water lily, but the hardy varieties are the easiest to grow outside in our climate. They flower with a wide range of colours, except for the blues and purples. For those shades you need to grow the less hardy tropical varieties.
Garden centres will have hardy varieties in stock now, usually growing in little tubs they have constructed for display purposes.
The hardy water lily existed only as a few species, found in different parts of the world, until the mid-1800s when French nurserymen created hybrids of many different kinds including most of what we now regard as classic water lilies. These were the same water lilies that Monet bought for his ponds, and most are still in cultivation today. New hybrids continue to be produced by today's growers, expanding the range of colour and form. 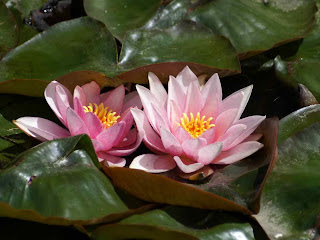 The easiest way to plant water lilies is in special mesh baskets. Start out by putting some aquatic fertiliser tablets in the base of the basket then fill the basket with garden soil, clay or special water lily potting mix. Do not use normal potting mix as it will probably have too much fertiliser in it.
The basket should be three-quarters filled with the soil, and formed into a mound. Place the lily rhizome on the top of the mound, tilted so the growing tip is at the final soil level. Fill the rest of the basket with soil, then top with gravel to help hold the rhizome firmly.
Gently place the basket into the pond. Often the plant is placed in shallow water until it has started growth, and then placed in slightly deeper water. The idea is to keep the pads at, or slightly under, water level.
The elegant flowers will appear right through summer. Once the flower bud reaches the surface of the water, it will open in the morning and close in the evening for three successive days before sinking beneath the surface again.
Water lilies need very little ongoing care. When they have filled their baskets they need to be divided and replanted – it is a good chance to swap varieties with other growers. At the end of the season remove all dead foliage and just leave the basket to over winter, as these plants are true perennials and go dormant over winter. 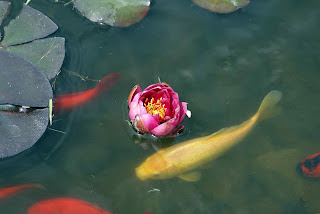 Water lily 'James Brydon' and fish
If you are in the Hauraki area this summer take the chance to see these water gardens – the various water lilies are worth the effort alone, and there are plenty of other horticultural attractions as well.And see if you can out up with the “Dad jokes” while you are there!
Posted by Archivist at 8:48 PM