A few months ago I made a promise to myself that I would try and get fit enough to run the Country half marathon, held in mid-October. I have run it in the past - the distant past - when I was a keen runner. I worked my time down from the 1.50 I first ran, to 1.23, a good club runner's sort of time. I knew I would be lucky to break 2.00 nowadays, being 55 and running so much less.
Then, on Thursday night, I read about a half marathon being held near Carterton, the next town down the valley, in aid of Child Cancer, and organised by my uncle.
I rang Uncle Ray and asked if he would take a late entry, and he told me he looked forward to seeing me on Saturday. He explained it was a staggered start, as it was an open handicap, and asked what time I thought I would run. I told him I hoped to do 2.00. I didn't tell him I really had no idea, as I had not timed myself on any runs.
Come the race and I was a worried old man. The course was at Belvedere, tucked under the Tararua ranges, in a windy area, and there was a front approaching.
I was right to be worried. Keith Davenport, who has a very interesting Flickr site under the name of Sir Wise Owl, took this picture of the clouds building up.
You can see his other pics at http://www.flickr.com/photos/sirwiseowl/ 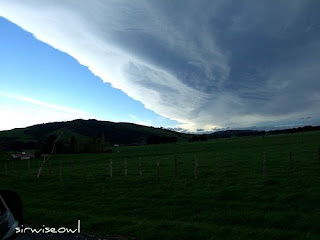 I started running at 1.00 (the anticipated mass finish was designed for 3.00), starting with a hill climb into the wind, and then a slow downhill into the wind.
The wind was so strong that the worst gusts literally stopped me!
We then turned to run sideways across the wind - no easier - and then ran downhill with the wind behind us. As I stretched out too much and hurt my calf muscle. I kept in running, thinking that if it got worse I would just pull out, but it did not deteriorate.
The course was a three lap event, but by the time I got to the start line on the second lap the wind had died down a lot. I was also able to catch up to another runner and use him to shelter behind as we went into the wind. He took off once we were out of the wind, and I never saw him until about the same place on the third lap. By that stage the wind had nearly died right away and it was raining! 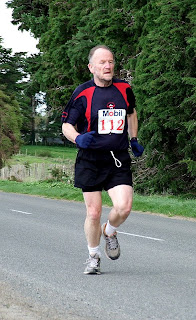 I was aware that I was on pace for the two hours, as I knew I was running 40 minute laps. I caught up to the man I had been sheltering behind as we turned for home on the last lap and managed to overtake him.
I crossed the line and heard the timekeeper call out "02."
The way this week has gone I was sure it would mean I had run 2.00.02, but no, I ran 1.59.02.
My calf seized up once I stopped, but it has eased a lot now and I can reflect a little on the run.
I enjoyed the race (although I was hardly racing!) I enjoyed the wind too - it just made the whole thing more exciting. And I was surprised how emotional I was as I came near the finish line. My scalp was tingling and I was really pumped up.
Now the question is - did I use this small event as a run-up to the Country half marathon, or am I satisfied?
Posted by Archivist at 12:00 PM