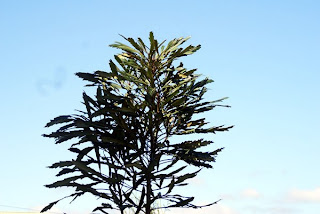 Last Friday I went rafting on the Ruamahanga River with a group from the Rangitane iwi authority. The river was up with a good fresh running through it when we dropped our rafts in at Mount Bruce. It was raining lightly but it was not cold and we all had a pleasant trip through the many rapids and pools that make up the upper portion of the river.
We also floated through the short but stunningly beautiful Ashleigh Gorge, where the native trees come right down to the water’s edge. I had rubber-tubed through the gorge in summer, when the water level was lower, and it was just as lovely then.
One of my fellow rafters had joked about me not being able to write a garden column about the trip, and then in the next breath enthused about one of the beautiful plants growing alongside the river, a stand of immature lancewoods, with their spiky leaves. I decided then it was time to do a story about the native Pseudopanax. I thought I would not embarrass my rafting fellow by naming him as the inspiration of the story. Later in the journey, though, in a tricky section of the river, he bounced across the raft and into the cold water, taking me with him, so Jason, here is the story of the Pseudopanax.
The lancewood is one of the many New Zealand plants that undergo a radical chance in habit as it progresses through its juvenile stages to adulthood. The thin, strappy leaves of the seedling plants are hardly recognisable by the time they have fully matured.
There are only about ten species in the genus, eight of those being confined to our fair land. The other two are found in South America. Although few in number, there are some wonderful garden plants among them.
Horoeka, the lancewood, is a small, round-headed tree when mature, but starts out life as a gawky thing, with a single stem clothed in very thin leaves that droop almost parallel with the stem. All are coloured a purple shade, often with a contrasting rib mid-leaf.
As they plant grows it passes through two or three more stages, until it ends up as much-branched, round-headed tree atop a sturdy stem.
In the wild this tree is usually found in the forest, but it has proven to be remarkably adaptable in the garden, and seems well able to cope with periods of drought. It is quite wind proof too, as the leaves are very wiry while the stem is very flexible.
I think it looks best in groups, as a single plant can look a little lonely. They are especially suited to modern native gardens, their hard look marrying nicely with grass gardens or flax areas.
There is actually an even harder looking plant than the normal lancewood – the toothed lancewood, P. ferox, also sometimes called the fierce lancewood. This has sets of fearsome sharks teeth ranged along each side the slender juvenile leaves. The leaves are often variegated, with a bright mottling often seen in the wild. This tree should be planted more often. It was first found in Otago by the botanist James Buchanan, who also searched for plants along the banks of the Ruamahanga in the 1870s.
Posted by Archivist at 12:06 PM

I read your blog and ıcan say you perfect,good luck,best wishes.