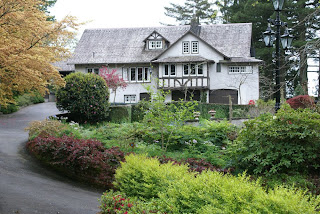 Despite making almost annual visits to the Taranaki region to look at gardens, I had never visited ‘Tupare,’ the famous Matthews family garden, on the banks of the Waiwhakaiho River. This month I finally made it. The Taranaki Regional Council, who administer the 3.6 hectare garden in conjunction with the National Trust, has spent a lot of time and money over the past year or two renovating this garden, and at the time of our visit it look sparkling and bright.
The garden was established from the 1930s by Sir Russell and Lady Matthews, surrounding a Chapman-Taylor designed homestead, with other Arts and Crafts buildings throughout the grounds. The council has renovated some of the gardens, and made a new visitor centre, as well as renovating the exquisite homestead.
As always with Taranaki gardens, the gardens were very lush and featured a lot of moisture-loving plants such as bog primulas and hostas, as well as woodland plants like dwarf anemones. The maples, which always seem to do extraordinarily well in Taranaki, were also a feature, as they were just coming into leaf. We stopped to admire the tiny flowers on one or two varieties, and also drooled at the sight of a ‘Chishio’, one of the smaller varieties, coming into leaf in the dappled shade of some large trees.
Japanese maples do best in free-draining soil, but need constant moisture. They simply do not like dry soils. They also need good shelter from strong winds, as their leaves are very wind tender. In sheltered spots in Taranaki, they grow as well as anywhere in New Zealand.
The most unusual feature at ‘Tupare’ was a bank of wildflowers, behind a very formal wisteria-draped pergola. The large bed featured a few weeping cherries (only recently planted, and not what I would have chosen) but the highlight was an extensive planting of bluebells. This is a very English idea – the bluebell copse often pops up in English literature as well as in garden design – and is slightly outdated I guess, but looked fabulous in association with the Tudor-influenced homestead.
These ‘English’ bluebells are usually not English at all – they are most commonly Spanish bluebells, Hyacinthoides hispanica. This species is slighter bigger and showier than the English species, H. non-scripta. English environmentalists are worried the Spaniards have escaped from gardens and potentially threaten their wild species.
Bluebells are very useful woodland bulbs as they have evolved to flower before trees leaf up, meaning they can survive well in shaded areas. In New Zealand they were often planted underneath silver birch clumps but they will even survive under evergreens, provided they can grad a little light.
The ‘Tupare’ bluebells are a mix of white and blue – there are some pinkish varieties too – and look very effective on their steep bank.
There were also a large number of other bulbs throughout the garden, including some purple and white Sparaxias which had escaped the beds and naturalised into the surrounding paddocks, along with a few of the blue bells. I was chuffed to find a nice clump of the Sea Daffodil, Chlidanthus, in flower in a sunny bed near the house.
The Matthews family obviously gardened with all the senses in mind, as there is frequent use of scented plants, Michelias and the old scented Rhododendrons, ‘Fragrantissimum’ and ‘Countess of Haddington’ all being prominent.
‘Tupare’ is a great garden to visit. We spent a relaxed couple of hours wandering through the hills and vales that comprise the grounds, and thoroughly enjoyed ourselves. The Head Gardener was delighted to find a pathway named after herself – or a Matthews child with the same name, anyway.
Posted by Archivist at 4:26 PM