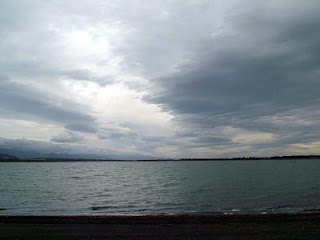 I am still on leave so took the chance to go visit the other end of the Ruamahanga River today – the Lake Onoke Spit, the barrier between the waters of the Ruamahanga system and the sea, on the shore of Cook Strait.

The Lake Onoke ‘spit’ is a mixed sand and gravel barrier beach that has formed by concurrent processes of marine sedimentation and tectonic uplift. In the process it has impounded an embayment to form a shallow coastal lake, Lake Onoke.
Mixed sand and gravel beaches are uncommon shorelines types and the examples that occur in New Zealand are internationally significant. The shallow coastal lake and gravel barrier system is one the largest of its kind in New Zealand and its relatively unmodified state makes this feature an outstanding example of its type.
I was expecting to find the colony of Caspian Terns that my friend Colin Scadden has been documenting for many years, but I saw no sign of it. I was accompanied by Black Backed Gulls at times, and saw a few shags, oyster catchers, dotterels, and a group of four gannets, swooping along the shoreline, parallel to the coast. 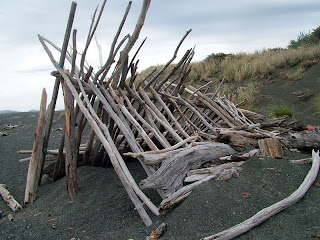 There were signs of visitors, including this shelter which has probably been constructed over the summer. 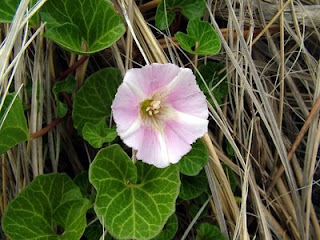 The spit is partially colonised by plants, including the lovely nihinihi, Calystegia soldanella. Those of you who are gardeners will recognise this as a member of the convolvulus family. It does not grow naturally inland, so I assume it is frost tender. 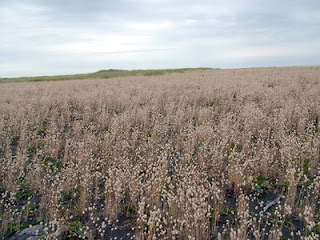 In many New Zealand coastal places Hare’s Tail Grass, Lagurus ovatus, is a common component of the flora – here on the spit it has made one or two extensive lawns, which look quite pretty in late summer when the seed heads are full.

On my way back along the spit I found a fish - but the birds had found it first!
Posted by Unknown at 7:51 PM

Loved going through the photos. Stunning views and the nihinihi is gorgeous!

The Caspian terns are not there all year round. the arrive usually about late October, and leave when the chiocks fedge, usually in January sometime

interesting read. I would love to follow you on twitter. By the way, did you guys know that some chinese hacker had busted twitter yesterday again.