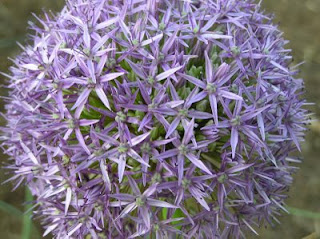 I love autumn. The first of the autumn rains has freshened up the soil and the tremendous heat of the summer is starting to dissipate. Although much of the garden is preparing itself for a winter slumber, some plants are at their decorative best at this time of the year. This year I have noticed that the English Oak trees appear to be having a very good cropping season – their bright green acorns seem to be displayed more prominently than usual.
There is another reason I love autumn though – it is the time to start ordering and buying spring-flowering bulbs. I love most times of the year in the gardenbut the flush of spring flowers is surely hard to beat.
This year I have been thinking about onions, garlic, leeks and their kin – not only the ones in the vegetable garden either.
The ones in the vegetable plot are doing fine, although I had some worries with the onions. This year they just did not want to form bulbs, growing thick stems instead, and looking like giant spring onions. In the end most of them made bulbs, but not until late in the season. I may have planted them a little deep – they prefer to grow almost on the surface – and the soil may have had too much nitrogen, forcing leaf growth rather than bulbs. The problem seems to have fixed itself, and we will be picking the crop very soon – as soon as the leaves, now folded over, have died off.
I have always been a fan of the ornamental members of the huge Allium tribe, and grow two or three different species and hybrids here. But this year a new form has taken my eye, a hybrid between Allium christophii and A. macleanii called ‘Globemaster.’
It was A. christophii that first got me interested in these oddities of the garden world. A lovely clump was well-established in the first garden I loved, that of my grandparents. It threw up the most glorious globular heads of silvery pink flowers in mid –spring. The flowers lasted for a couple of weeks, then gradually lost their colour until they remained as a dried seed head, much treasured by my grandmother for her flower arrangements.
‘Globemaster’ takes this style a step further. Each head of flowers is up 20 cm across, held on chunky stems of up to a metre high. Every starry flower in the head is bright violet, and shines in the sun. British gardeners have acclaimed this as the best large flowered Allium yet bred. I cannot wait to see this flowering in my garden next spring.
‘Gladiator’ is also around for the first this year. This is taller and the flowers are deeper. They look, according to one catalogue I have looked at, “like giant softballs.” I do not know whether that is an inducement to plant or not, but they make brilliant accent plants for the middle or rear of the border.
It might pay to think carefully about placing these bulbs as they tend to lose their foliage early in the season and can leave a bit of a gap in the garden. I think they would work well with some mid-sized Dahlias planted in front, to take over when the Alliums have finished.
Posted by Unknown at 8:50 PM

I love alliums, their huge blue heads!Your picture is magestic, especially when enlarged. Then, you can see several bugs as a bonus! Thanks!!!