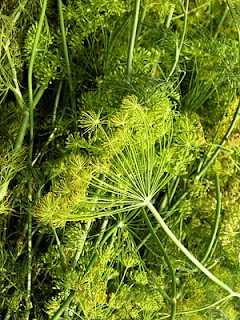 The first week in March is Herb Awareness Week, promoted by the Herb Federation of New Zealand.  Each year the Federation promote the herb of the year as chosen by the International Herb Association, and adds another three herbs of their own choice.
This year the international choice has been dill, a member of the vast Umbilliferae family, along with carrots, Queen Anne’s Lace and parsley.  It is an easily grown annual, looking superficially like fennel, but with blue-green leaves rather than fennel’s yellow-green ones, and lacking the distinctive aniseed scent of the latter.
It is best to sow the seeds in situ as the plants resent being moved, like most of their cousins.  They are spindly growers and might even need some twiggy framework to cling to us they grow, but once established they are self-supporting. They are usually grown in a succession of sowings, as they mature in about six weeks and a number of crops are needed to ensure a constant supply of leaves.
They are good plants to have growing in amongst others as they attract lots of insectivorous insects – the ones that will eat your aphids -  and the little umbels of yellow flowers are very attractive in a subdued way.
Dill is one of those classic herbs, more commonly used in than in the Mediterranean areas where it is supposed to originate.  The leaves are best snipped and chopped very finely, before being added to fish dishes in particular.  The leaves are best harvested shortly before flowering as they will be at their strongest then.
Once flowering has occurred, the plants should be left alone to ripen the seeds. These are used us a flavouring for pickles, in particular for small pickled cucumbers.  I have a friend who makes some pots most summers, and lets me have a jar if I am especially nice to her – and they are delicious
It is also said to have some medicinal properties.  If taken at bedtime it can help sleep, as both leaves and seeds have a mild sedative effect.  It is also meant to be great at getting rid of the hiccoughs!
Posted by Unknown at 8:50 PM

I planted my first dill last year and left it to set seed hoping there will be some self sown seed sprout to provide me with some nice dill this season.

Dill is great in pickles eh?

What a great resource!