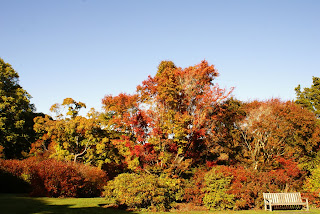 The balmy autumn has continued, much to the consternation of many farmers and gardeners. Warm and sunny days, and near frost-free conditions might be nice of you are on holiday or looking to relax, but it is starting to be a nightmare again for those who need some rain. The summer was moist enough to keep most east coast farmers happy, but there will be a few out there scratching their heads, wondering what happened to the autumn rainfalls. The same applies to gardeners – a weekend in the garden has shown me it is much drier than I had thought, and as I finished each section of the garden, I dragged a hose behind me to try and get some moisture into the soil.


As always, we will be looking at the bright side, thinking that a relatively calm autumn might be good for autumn colour, but the warm conditions will militate against that too, as warmer temperature actually lead to less colour. Has anyone ever travelled to Auckland to see the autumn display?

I caught the start of the autumn colour season while in Dunedin recently. High on hills at the northern end of town, the Dunedin Botanic Garden is a treasure for garden lovers, filled with all sorts of exotic treasures, set in well-tended gardens that I wandered through on a number of occasions. Near the end of our stay, I took my camera with me for a concerted walk through as many of the different gardens as I could.

I was not expecting the Rhododendron garden to be as interesting as it was, bearing in mind it was so late in the season. There was very little in flower, although there were some R. yakushimanum varieties flowering out of season, but the effects of the coloured foliage, a mix of maples and azaleas mainly, was outstanding.

These plants are both relatively easy to grow, and can usually be called on to give a good year-round display.

The deciduous azaleas are probably best known for their wonderful display of flowers in late spring – October and November – when their delicious red, yellow and orange displays are so eye-catching. They flower on bare wood (usually see later) so the flowers are displayed very prominently, and being late flowering they are also safe from frost.

These very hardy plants are probably not as popular as they once were, but they give an unrivalled display, and they are very garden friendly. They are hardy, pest free, easy to look after, and very long lived – what more could you look for in a shrub?

Botanically, these plants are Rhododendrons, and as such need a relatively acid soil, preferably also moist. They are shallow rooting, and they do need to be kept moist over the summer, so thin limey soil is not for them.

There are many varieties on the market and it is pointless for me to suggest any particular ones, but the New Zealand raised Ilam hybrids seem as good as any to me. If you are in the Manawatu area in spring, a visit to the Rhododendron gardens at Kimbolton will be enough to make a convert of you.
Posted by Unknown at 7:33 PM