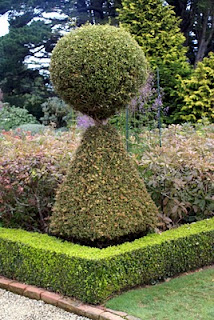 One of the difficult areas of the garden is the border lands – those awkward areas where the garden finishes and other elements of the environment start.  It can be the line between the garden and the lawn that is the problem, or perhaps the delineation between physical boundaries, such as neighbouring properties or a driveway or roadway.
In some situations an informal edging between the two environments works well.  In a woodland garden, for example, it looks great of the understory of planting gradually give way to a soft bark pathway, or even on the edge of quite hard planting, the effect can be softened by having sprawling plants that help blur the edge.  We have a wooden wall retaining an elevated lawn area, and have planted some trailing plants to help soften the boundaries.  Sometimes, though, you actually want a clear delineation between two different areas, and that is when formal hedging some into it own.
I was recently in the extensive gardens of , high on the Otago Peninsular, overlooking and Port Chalmers – I was supposed to be visiting the castle itself, but the gardens held my attention for much longer than the building.  Even though it was late autumn and the garden was long past its summer splendour, there was still plenty of interest.
The formal gardens in front of the house have been cleverly designed to reflect and augment the severe Scottish Baronial architectural style employed in the castle, with very formal edgings in somewhat informally shaped beds.  The beds are extensively edged in box, with corner highlights of totara topiary.
There are a number of varieties if box hedging, all forms of Buxus.  The most commonly grown is English box, a relatively slow growing form.  This sounds like a less desirable trait, but you have basic conflict between the desire to have your edging looking as mature as possible, as quickly as possible, and the need to keep the growth under control once the plant has reached its desired height and width.
I would plump for English box, perhaps buying the more expensive advanced grade plants, which can be found easily enough in the trade. They will be four years old and perhaps 40 cm high.  Pop some fertiliser in the soil once the plants are well established, and continue to fertilise about twice a year.  It is essential to water the fertiliser in well as it will burn the foliage is just left sprinkled on the surface.
Posted by Unknown at 7:16 PM

Hedging plants plays a crucial role when it comes to security purpose in the garden. Depending upon the plants grown and size of the garden these hedging plants can be used. These grow 4ft to 16ft height and safeguards entry’s to the garden from the outsiders.

Hey i've always apreciated the artistic way,the way many people do trim it...it does looks like you do need a touch of professionalism to do it..i use to did this job once,with no gardening experience...just a matter of proper equiment and a full spoon of concentration...