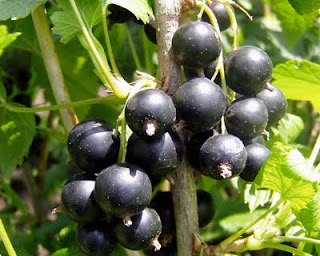 When there is snow quickly accumulating on the back lawn and it is freezing cold outside what else would a garden writer be doing but thinking about summer fruits, and how we should be making sure we have any new plants well and truly tucked into their garden beds soon.
My parents were not great small fruit growers , although my mother was keen on black currants and had a row of bushes that straggled across the back garden, and there were a few ferocious gooseberry plants too, but they were only looked after in a desultory fashion.  Although I quite liked Mum’s black currant jam, I certainly could not raise too much enthusiasm about going out to help her pick the thousands of berries needed for her jamming exploits.
I was a bit remiss really, as they are excellent plants for the novice gardener to start their fruit growing career with, being relatively easy to grow and very hardy.  In fact, coming as they do from the hard northern climes, the will probably be relishing a bit of snow at this time of the year – they need winter chilling to fruit well.
The variety you are most likely to come across is ‘Magnus’, which has very tart fruit until the very last minute before they ripen – the kids will certainly not be thieving them to eat them half-ripened!   The plants do best in humus-rich slightly moist soils, and prefer it to be slightly acidic – Rhododendron country suits them well – so make sure they are not planted in thin dry soil.
When you plant a new bush it pays to prune it back to two buds above the ground then leave it to grow and do not prune for two seasons. After that you will need to prune to shape by removing the old stems to a new low bud, removing at least a third of the old canes. Plants do best with about ten shoots per bush, none of which should be older than three years. To foster young wood you should cut down old wood to new buds in winter.
Red and white currants are also great for the home garden, and although they are related to black currants, they need a different planting and pruning strategy.  When you first plant you should prune to establish a short main trunk. The following season, chose four main branches making a vase shape with an open centre. Each winter, prune these branches back and allow a few more to develop until you have established a framework with about eight main branches. Each year prune these back by about half, and then at the fourth year remove one or two of the main arms back to its lowest new shoot each year as these currants bear from permanent spurs and will bear for a few years.  You should aim to have an open growth habit with main wood in the two to three year bracket.
All these currants have attractive shape and they would make a pleasant boundary hedge around the edge of your vegetable garden if they were carefully managed.  If you had a variety of different types you would also have an attractive fruiting feature in summer.
Posted by Unknown at 8:47 PM