Silver trees of red and yellow 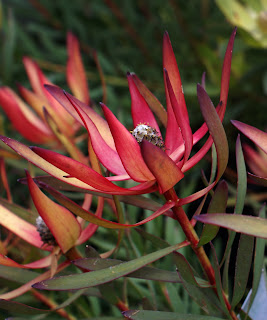 Today the Head Gardener and I went down to the nursery to look at some Leucodendrons.  I have to say it felt a little odd looking at South African plants after such a cold week, but most Leucodendrons will cope alright with the sort of weather we have just had, as long as they are in a well drained site.
There are about 80 species of Leucodendrons, with a staggering number of sub-species, forms and varieties, many of them bred in New Zealand and Australia.  They are all native to the Cape area and have their flowers non separate male and female plants.  The flowers themselves are relatively insignificant, but they are surrounded by often very decorative bracts.
In the wild they grow in the same sort of conditions they require in the garden – they need well-drained, acidic soil (not too rich in humus either) and they need full sun for the bracts to colour up properly.
I suspect the Latin name for the genus, with means “Silver Tree” must have been given after a botanist saw the remarkable Cape silver tree, L. argenteum, with its large green leaves totally covered in silky silver hairs, giving the impression of a silvery sheen.  In the wild it can grow quite scruffily but in the garden it is a delightful sight, staying well clothed and performing well, especially if kept clipped when young.  It seems to need better drainage than most varieties, and it is definitely less frost hardy than most common species, but if you have a warm spot this is a spectacular plant.
The most popular of all Leucodendrons is undoubtedly ‘Safari Sunset’, a hybrid raised in the 1960s and very quickly developed as a cut flower.  At one time it seemed to be in every garden, and in vases in every American television programme as the epitome of chic.  It is less planted nowadays but it is still a very valuable plant for the winter garden, providing a great dash of colour at a time of the year when there is little else around.
It is an enthusiastic growing plant and is inclined to get away a little if not kept clipped when young., reaching up to about three metres if allowed.  Trimming is fun of course, because you can pick the stems for the house.  They look especially good at this time of the year when the dark burgundy colouring of earlier in the year has faded a little and the centre is starting to go yellow.
‘Rising Sun’ (photograph above)  is another good red coloured variety, probably intermediate in size between the two foregoing types.  It has bright bred bracts over winter fading to cream for the spring.  This is another good variety for picking.
Posted by Unknown at 8:43 PM