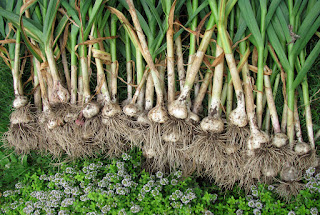 I was quietly tilling the soil in the vegetable garden during a slightly fine break at the weekend, preparing it for a mid-winter planting, when it dawned on me that I was getting ready for one of my favourite genera (that is a flash way of saying my favourite group of plants).  This is a group of plants that forms a significant part of my vegetable crop rotation, is also found in my little herb garden, and yet is also one of my favourite flowering plants as well.
In case you had not already worked it out I am talking about the wide Allium genus, home to onions, garlics, leeks, spring onions, shallots, and chives as well as innumerable glorious flowering bulbs as well.
At this time of the year it is the garlic and shallots that are occupying my mind, as mid-winter is the traditional time for planting them.
Shallots are small perennial onions I guess – usually sweeter and less pungent than true onion, and usually grown from divisions of an extant bulb rather than from seed.  I grew a good crop of these last year and have kept some of the bulbs aside to use for planting this year.  I found that each bulb I planted grew about five or six new bulbs, and as they are very much a “no fuss“crop they are ideal for the new gardener.
It is best to fertilise you soil well, with a general fertiliser – make sure it is not too nitrogen rich as that will lead to soft growth and potential disease problems later one.  I worked the soil up to a fine tilth and then planted the shallot bulbs about 1-2 cm below the surface.  Some people say it helps start growth if you soak the bulbs in some cool water for about 15 minutes before planting, but I figure that is unneeded as they are going to be soaked soon enough!
The theory is that the plants will have grown to maturity by mid-summer, but I found last year they needed a little longer in the ground.  We had a terrible summer of course, so that may have been the problem.  Anyway, it is the usual onion trick of waiting until the tops start to fall over, then twisting the tops to let the bulbs dry out naturally.  The bulbs store well without sprouting and can be used right through the winter for extra flavour.
Garlic grows in a very similar manner, although a garlic bulb has more divisions (“cloves” as cooks call them, although they neither taste not look like the spice cloves.)  Garlic is very tough and hardy and remarkably easy to grow for the home gardener, although it must be stressed that it does best in good soil.  If grown in poorer or damp soils it tends to be more reluctant to fatten up very much.
Again, plant the cloves with the blunt end down, and just push gently into the soil, which you will have pre-fertilised. They will take a little while to pop into life, but soon enough they will be racing away.  If you have grown your own previously, you can just keep some cloves for planting out, but it probably pays to buy in some fresh stock every few years, just to make sure you have vigorous plants.
If you have a bit of room to play with, and lots of cloves to play with, you could grow some “garlic greens” by planting a clump of cloves quite closely in fertile soil and harvesting them through the spring and summer, leaves and all, and using them in stir fires.
Posted by Unknown at 3:50 PM