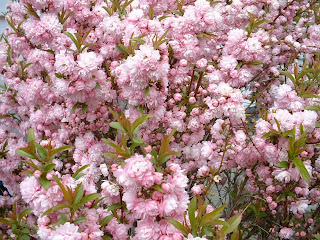 Mid July is a funny time in the garden.  In reality, in most year there is little to do apart from a bit of cleaning up work.  If you have a large fruit tree or rose collection it is a good time to get cracking on with the pruning and tidying that winter brings, and it is also a good time to get some clean-up sprays on.
It is also a time when we get a hint of the coming of spring, with a few spring precursors putting out their first flowers.  I have the first of the spring irises in flower – the oddly coloured (green and velvet black flowers are unusual!) Iris tuberosa, sometimes called Hermodactylus tuberosus.  It is a sun-loving Iris from the shores of the Mediterranean, sometimes called the “snakes head iris) from the odd shape of the tubers, which have a hood-like effect at one end.
The first of the snowdrops is flowering too – the lovely double form called ‘Lavinia’, a present from a good gardening friend at the time my daughter died.  Like most snowdrops it flowers after the turn of winter, often popping out of the snow in gardens in the northern hemisphere, hence the common name.
I even found a delightful clump of very early daffodils (not jonquils or tazzettas, proper daffodils) flowering under a fence in Boundary Road the other morning.  They are tiny plants – not more than 15 cm high – but they looked so fabulous I went back later to photograph them.
There is something else out at the moment – the first of the flowering Prunus trees, the delightful Japanese apricot, P. mume.  The most popular variety by a long way is the sweetly fragrant ‘Geisha’, rose pink and single but so filled with stamen as to appear double flowered.  This species is very popular in both China and Japan, for ornamental reasons, but also for the fruit.
There are other flowering Prunus trees that are not grown as much as they used to be, but which are among the most beautiful of all flowering trees and shrubs.  I have always been very fond of the flowering almonds, especially the double forms of Prunus gladulosa. The best of these is the pink form, called ‘Rosea Plena’ – literally pink double.  It is a small-growing shrub with extensive branching.  In the spring it covers itself with bright pink flowers, and then in autumn it throws a display of reddish foliage.  At its best, this is one of the prettiest flowers in the garden, and usually sells on sight in the garden centre.
Its white counterpart, ‘Alba Plena’ (I am sure you have worked out that means white double!) has heaps of pure white flowers along the stem in spring.  Both the white and pink forms make wonderful subjects for cutting – they flower right along the length of the stem and look spectacular.  Cutting them back also encourages the best shape for the shrubs too.
I am also fond of the flowering plums, especially those with the dark foliage that gives such a good contrast to lighter coloured trees and shrubs throughout the summer growing season.  The old favourite ‘Blirieana’ has slightly double rich pink blooms in August, and is the result of a cross between P. mume and P. cerasifera ‘Pissardi’. It has slender arching branches and reddish purple leaves which turn purplish green in summer.   For those who are put off flowering plums by the tart fruit that some flowering forms also produce, this hybrid is sterile, so does not produce fruit.  It makes a good street tree and is used for that purpose both in New Zealand and in Australia, as it only grows to about four metres.
Posted by Unknown at 8:43 PM