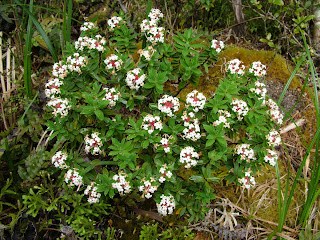 Pimelia longifolia on the slopes of Mount Holdsworth

There are a few New Zealand Daphnes, although I have to say the most common of them in the garden does not look anything like a Daphne, and is a scent free zone.  Interestingly though, it is a plant you will find on rocky places on the Wairarapa coastline – Pimelia prostata, a small silver leaved shrub with small off-white flowers.  If you have ever tramped up the pathway to see the Castlepoint Lighthouse you will have walked past these plants at the bottom of the track, and on other rocky places on the reef.
There are some cultivated forms available in the nursery trade.  Perhaps the best of these is ‘Silver Ghost’ which is an attractive silvery groundcover. The flower heads are much larger than any other groundcover Pimelia and will also get around 30cm.  It is a great plant for walls or the edge of the border, but also looks great cascading down the side of a large pot.
There is another Pimelia that graces Wairarapa, P.longifolia, and it also grows alongside a track, but in this case you will have to climb a bit more, as I have seen it at its best on the track to the Mount Holdsworth summit.  Its common name is Taranga, and oddly enough, it looks a lot more like a Daphne than its sister the New Zealand Daphne.  Go figure!
It has comparatively long leaves (as its name suggests) and bears lots of pink-flushed white flowers on the end of its stems.  The individual flowers look very much like Daphne odora, but they are larger.  They are said to be slightly scented, but I have never caught a hint of fragrance, but then again, I may have been too exhausted to notice.
This is not too easy to grow in the garden – it requires quite gritty soil and it does not like to get too hot over the summer.  It is hardy, as it does not seem to occur on Mount Holdsworth until Pig Flats, but it is found almost all the way to the summit.  It flowers in the early summer, but altitude makes a big difference as there are weeks of difference between the lower and higher plants.
If you are really interested in native plants you might be aware of the recently named Pimelia mimosa, found in the wild only on the steep, south facing cliffs of Te Mata Peak, high above the Tukituki River.  It is another silver leaved variety (like P. prostata) but unlike its cousin it is an upright growing form, with an attractive tight growth habit that means it forms a mounding shrub, which will grow to 40cm high and 1m wide within the garden. It has particularly silver foliage, set off by the white flowers are carried over a long time in summer, sometimes in great profusion.
Unlike some of the other forms of this plant, this one has evolved in harsh dry conditions, and will cope with most things a Wairarapa summer will throw at it, so should become a popular garden plant in our region, as it has in Hawke’s Bay.