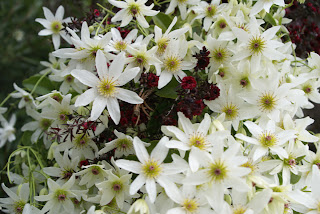 I was wondering around the outer streets of Masterton the other morning, relishing a day without too much wind and rain.  As always at this time of the year, my head was filled with gardens, because a stroll through suburban developments is an intriguing glimpse into people’s gardening fashions and passions, and is also an interesting history lesson in the sense that some gardens canbe very accurately dated by the plant palette that has been employed.
I could not help notice the number of very bad native gardens there are.  Some of them date back quite a while, before the more recent craze for indigenous planting, while others are newer.  Where these gardens fail (in my opinion of course) is that they do not appreciate that they are gardens, human constructs, not some bizarre attempt to make a fake New Zealand landscape.
In its worst manifestation, this style of garden is composed of lots of sedges, long past needing to be divided and replanted, some very scruffy looking New Zealand flaxes that have not been tidied since they have been planted, and a splattering of untrimmed Coprosmas, that have completely outgrown their allotted spaces.
But, I am delighted to say, there are also some inspiring gardens that are largely composed of natives and have been built in such a way they work as gardens, and still others where native plants have been cleverly incorporated into a wider planting.  Once combination was so clever and attractive I came back home to get my camera to take some photographs, and it was simplicity itself – a puawhananga scrambling through a red flowered manuka.
The puawhananga is the plant pakeha called the native clematis (there are others that we will get to soon!) and botanists call Clematis paniculata, and is undoubtedly the most beautiful, and also one of the most vigorous of the native clematis.  It can be found growing through forest margins and in bush land throughout New Zealand – there were plants in flower on the Rimutaka Hill road when I p[assed over recently – and is reliably hardy, although it can be hard to get established.
Like all the New Zealand clematis it is dioecious, a flash way of saying it carries male and female organs on separate plants.  This matters in the garden where we are looking for bigger flowers generally, and most of the varieties you can buy in the garden centre will have male flowers.
It is very difficult to transfer these plants from the wild.  They scramble along in the upper branches of shrubs and trees, and they flower a long way away from their roots.  To make things more complicated, the plant goes through a number of different plant habits too, making it hard to track back to the main plant.  On top of that they deeply resent being moved as well so you are best to buy a plant from the nursery.  .
When you bring C. paniculata into the garden you must remember to plant it the same say it grows in the wild.  It is a true forest denizen and needs conditions similar to its natural habitat - a cool root run, preferably in humus-rich soil, and good moisture.  It should be planted where it can clamber up a medium sized tree for best effect, as in the garden mentioned above where it was spreading from a three metre high manuka into a similarly sized cabbage tree.
Posted by Unknown at 9:04 PM