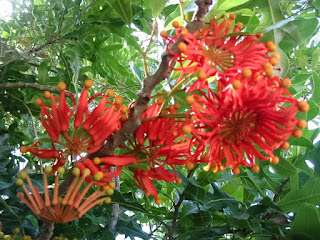 As if the summer season was not hot enough for gardeners and those in the nursery trade, my friends Laurie and Carol down at the Garden Barn in High Street decided to make things even hotter last weekend, with an unplanned bonfire in their potting shed.  Fortunately no-one was hurt in the fire (although Laurie was out of earshot when it started and caused some concern) and, although there was a fair bit of damage, they will bounce back.  This couple know only one way to cope with something like the fire – they will roll up their sleeves, knuckle down and repair the damage.
Being of a naturally cheeky disposition, I have decided to give them some choices for their autumn sale, some suggestions of varieties they may want to run specials on.
First up, of course, are the Cotinus, or as most of us call them, “Smoke Bushes”.   There are a couple of different groups of these, the American and European forms. The European species, C. coggygria, probably deserves the common name more because it has plumes of misty purplish flowers in early summer which fade as summer progresses and become even smokier.  Their foliage colours up in the autumn but the display is nowhere near as good as that of their American cousins.  One form, though, has amazing foliage right through the growing season, the deeply coloured form called ‘Royal Purple’  which has deep wine purple coloured leaves with a shiny surface. It has gigantic flower heads of light mauve over summer, and then for autumn colours up almost as well as the American forms.
The American C. obovatus is taller growing that its European relative, and does not have the same amount of flowers nor the same degree of smokiness.  Perhaps you could call it the politically correct smoke bush – the smokefree smoke bush.   However, what it lacks in flower power it more than makes up for with foliage display, especially in the autumn when the leaves take on hues of orange, scarlet and purple giving a startling display.  I think this may be the best autumn foliage display of any medium sized shrub.
These are relatively easily-grown plants, preferring a sunny situation and cool, free-draining soil.  They do not like the soil to be over-rich, and they certainly do not need fertiliser applied often, because when they are grown in rich soil they grow rather coarsely and do not colour up so well.  However, they do respond very well to trimming and shaping, the neater bushes giving better foliage displays.
I do not even know if my friends stock this next plant, a striking evergreen tree from across the ditch, but perhaps they will soon.  I am referring to the glorious Firewheel Tree, Stenocarpus sinuatus.  This flamboyant tree, native to the coastal forests of Queensland, is frost tender, but I have seen it growing very well in Napier, so I am sure you could get away with it in warm areas of Wairarapa, especially near the coast.
It has unusual foliage – the leaves are glossy green and wavy – and has spectacularly showy bright orange red flowers at this time. The flowers radiate out from a central point, giving the impression of a spoked wheel, and last into the autumn.  This is a great specimen tree (it grows about ten metres high) if you have a frost-free site.
Posted by Unknown at 4:28 PM