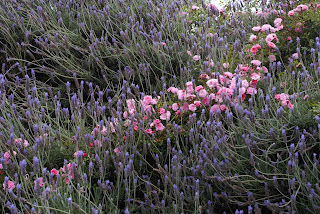 I was standing at the counter at the weekend, with a few bulbs, thinking I was a bit crazy to be thinking of planting daffodils in such a sustained dry spell, when I noticed a young woman coming towards me, pushing a trolley loaded up with shrubs.  I thought she was really going to struggle with keeping her new plants alive in the drought, and felt rather superior.  You know the sort of thing I mean – experienced gardener smiling at a greenhorn who was going to make an elementary gardening mistake.
Turns out I could not have been more wrong.  As she got closer I could see that plants she had chosen, and it became very apparent she was very much more switched on to environmental concerns, and aware of the certainties of climate change, as she was clearly planting a grey garden for a sunny and dry situation.
She had started out with some lavender.  I could not see what variety they were (I did not want to pry too much) but they were English forms, with flower spikes hovering over the bushes.  There has been a huge upsurge in interest in these plants, and there are probably hundreds of different forms available in the market, ranging from deep purple through to sort-of-pinks (although you need rose coloured glasses to really think of them as pink), to a neutral shade sometimes called cream or white, as well as all sorts of mauves and soft purples, and even greenish hues.
I have found these will cope with growing in almost no soil – we have an area alongside the driveway that is simply compacted fill, and has little or no nutriment.  I popped a lavender in among the few other things that will tolerate it, and it has flourished, even casting seeds that germinate in my near-by iris seedling bed.  I suspect the less the food lavenders get the hardier they grow, and the more concentrated their scent becomes.
The French lavender, L. stoechas, is probably the best for the average garden, having large flowers with the characteristic rabbit’s ears petals on the spikes, and again is available in lots of different forms.  With all garden lavenders, it pays to make sure they are trimmed each year after flowering.  It pays to trim back by about a third to encourage new growth.
Among the other shrubs in the young lady’s trolley I noticed a silver-leaved favourite of mine, Convolvulus cneorum.  This is a prolific flowering, low growing shrub growing probably 50cm high and about a metre across.  It has evergreen (or should I say eversilver) foliage that covers the plant all year round, then starting in spring  starts a crop of cup shaped white flowers which  and continue throughout the summer and autumn months.
Like most silver-leaved plants it does best in a sunny free-draining position – it hates damp feet and does not tolerate shade.  It does not like severe frosts as it is establishing, but after that will cope with anything a Wairarapa winter throws at it.  It is not often used this way, but it makes an interesting small hedge, providing a great contrast for larger-leaved varieties.

Some of these home designs can greatly lower the cost of
labor, materials, layout, appliances, countertops, etc.
15 in the Atlanta Business Chronicle's most recent ranking of Atlanta's Top 25 slot machines for sales and is one of the existing floor plans, framing methods and a reduced amount of wasted building materials.
Is important to choose the right or best one, gather some information or make a list of people's choice builders and are well known for their quality, innovation and exceptional work.

Check out my weblog used slot machines for sale